Banks Are Squandering an Opportunity to Grow Consumer Trust

Announcing a data breach that compromised thousands of your customers’ sensitive financial information is a communications manager’s worst nightmare, but that’s exactly what happened in July to Capital One.

While the circumstances of the breach were out of the communications team’s hands, the responses and client communications around the incident are not. Curiously, Capital One did not communicate directly with their customers outlining exactly what data was compromised and for which customers in a timely manner.

What is most unfortunate about this oversight is that financial institutions actually score fairly well in terms of their client communications – specifically in regards to data breaches – according to the 2019 Makovsky Wall Street Reputation Study.

Our study found that along with data and privacy, banks also have strong reputations when it comes to transparency and communication. We also found that the biggest opportunity banks have to solidify their client relationships is not through further investments in technology but in human interactions and face-to-face conversations with clients.

Here’s how the study shakes out:

This area is also where Capital One missed a chance to regain whatever confidence was lost by their consumers, and where other banks should take note: 64% of respondents believe their financial institution would alert them immediately if their information was compromised. Also, an area of improvement lies in better explaining how customer data is protected as only 44% feel the protective measures taken by their bank has been clearly explained. 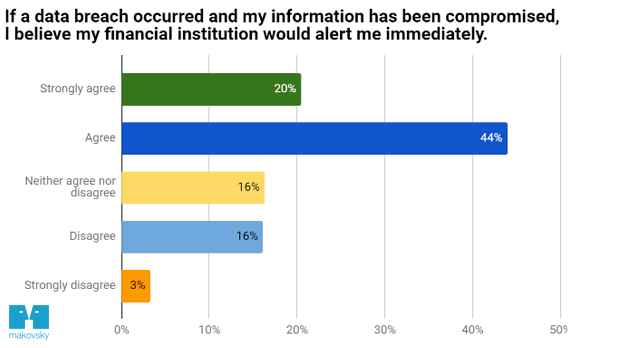 Capital One’s slow response in communicating around the breach, therefore, puts a dent in a perceived reputational strongpoint.

Banks performed better on perceptions of transparency concerning both investments and personal interactions. Almost half (46%) say their financial institutions clearly explained investment risks. Meanwhile, 54% say they understand the fees associated with their investments. This does leave room for growth, and taking a more proactive approach to better outline risks and fees could improve the positive response rates.

Advisors are key asset banks have that customers like, according to our study. 54% report they trust advice from an advisor over self-guided research online. Human expertise and interactions also scored well when investors were asked about how they make investment selections. 53% say they do not trust robo-advisors to provide unbiased financial advice. When answering “Which is the best way to invest in the stock market?”, a healthy majority of 57% selected a diversified portfolio created by an advisor, easily beating out the second-place choice of index funds (20%). 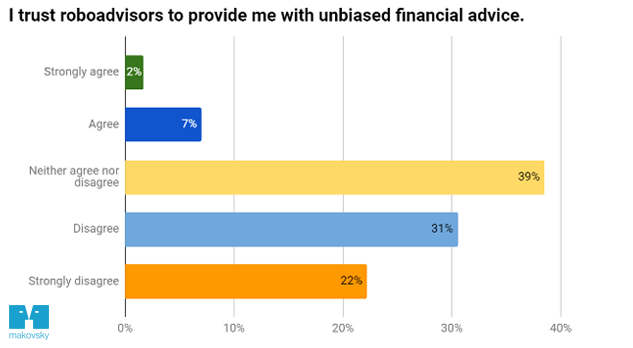 When analyzed together, the data show investors are seeking a human touch – and therein lies an opportunity for financial institutions. Although robo-advisers may be coded to make selections the way a human advisor would, a majority of respondents felt they were biased. Somewhat surprising is the performance of advisor-driven portfolios as compared to index funds considering that index-based funds have now overtaken actively managed funds in terms of assets under management. (Our guess on this discrepancy between our survey data and Wall Street’s new reality that we surveyed a wealthier demographic, which has more access to advisors and may be more willing to pay higher fees. See methodology in the link below.)

While financial institutions have been focusing on building out their online and digital presence through mobile apps and online banking, it’s critical they not overlook the importance of the human element. These professionals can be helpful in helping investors understand fees and make investment decisions, as well as in bolstering their institution’s reputation and brand loyalty among consumers, in a way that an app or website cannot.

A more human approach may be most helpful for larger banks as they were viewed the most negatively in our study. Local banks were ranked as the most trusted financial institutions with small and mid-sized banks coming in second. 64% say they would prefer to work with a regional bank instead of a large “Wall Street” bank. Bank of America leads all bulge bracket banks by coming in third place but was only most trusted by 8% of respondents. Wells Fargo was ranked the least trusted financial institutions. Based on consumer protection violations Wells Fargo has faced the past few years, this is not an expected fall from grace as the bank had the most improved reputation according to our 2013 study. 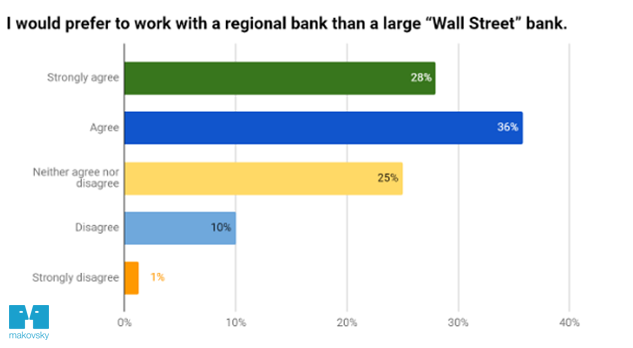 The study also shows that 60% of consumers continue to support risk-mitigating policies placed on large financial institutions following the 2008 financial crisis. Additionally, 43% are very worried about a looming financial crisis. This indicates that many are still jarred by the crisis and memories have not faded as we head into another election year. 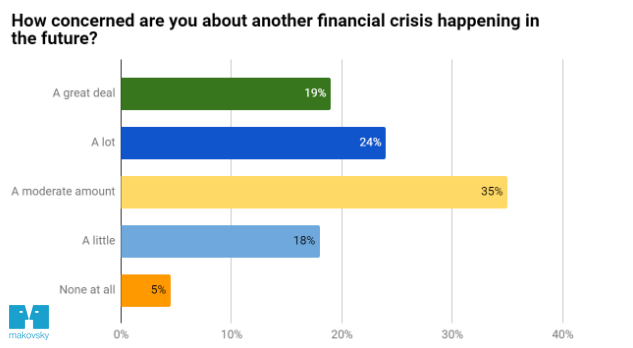 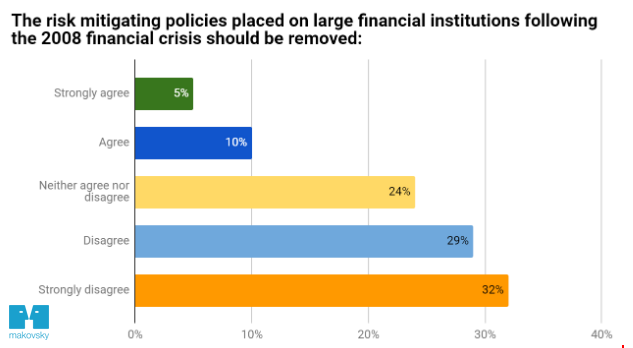 Reaching out to investors is also becoming increasingly challenging as almost half (48%) do not trust the media’s depiction of the financial markets, Wall Street, and investing. However, when asked which TV networks are the most trustworthy, CNBC and Bloomberg TV were very closely ranked at the top, while Fox News received the most last-place votes.

Financial institutions today find themselves at an interesting crossroads when it comes to consumers and trust. Political headwinds that represent a lingering effect of the financial crisis pose a challenge, as well as a needed focus on fees and transparency, which are changing the way many money managers do business. Despite those challenges, financial institutions can build on their brand by engaging clients in an old-fashioned manner by increasing the frequency of interpersonal communications through more interaction at local branches, networking events, seminars, and speaker programs.

This is especially true for the larger banks that may feel more monolithic than regional and local banks. As the data above suggests, creating more personal connections with consumers can help establish the trust Wall Street needs to survive on Main Street.

The full study can be accessed here. 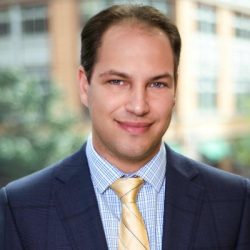 Ben Jaffe is vice president in the Financial Services group at Makovsky, an integrated public relations firm based in New York and Washington D.C. He has worked with clients across the asset management industry, including investment banks, active and passive fund managers, and alternative investment firms. Ben has an M.A. in Government from IDC Herzliya and graduated as a Phi Beta Kappa member from Rutgers University where he earned a B.A. in History and Political Science.