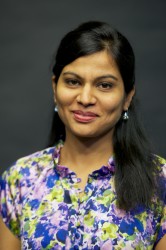 What are the expectations and attitudes Americans have towards large companies? What are their perceptions of business relationships and how can large firms build and maintain the public’s trust?  Are there some sectors more favored than others? These questions are important for large corporations to fully understand what might affect their corporate image and reputation. The Public Affairs Council looks at these issues through their Pulse Survey. The 2015 results are out and here are the top key takeaways for large companies that they can put to action:

Corporations are held to high standards: Public expectations for corporate behavior remain extremely high. Eighty percent say it’s important that companies make sure employees behave ethically and 76 percent believe firms ought to minimize any negative impact on the environment. Right behind these expectations are ones that call on corporation to take a leadership role in society (53%), make financial contributions to charities (52%) and encourage employees to volunteer their time (47%). 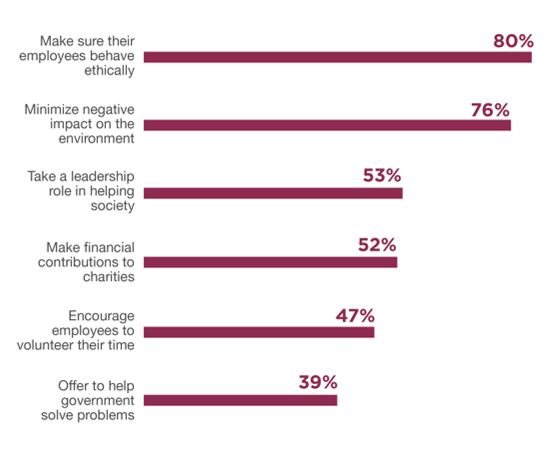 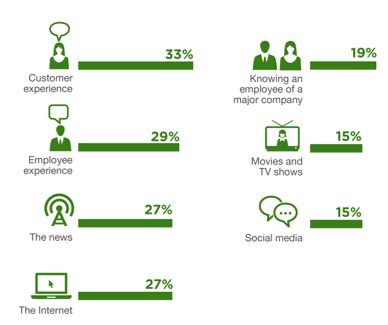 Inspiring confidence in a crisis is critical for organizations: According to this year’s survey, being accountable and transparent is key to restoring the public’s trust and confidence. When a company faces a crisis with its products or services, 72 percent say it would help “a lot” if a company simply explained how the problem happened and what is being done to correct the situation. An additional 22 percent say this type of straight talk would help “a little” to make them feel the company is doing the right thing. But people want more than explanations; they demand action as well. More than six in 10 respondents say they would feel a lot better about a crisis if the business took quick action to pay any costs to those affected — even if it is unclear who is at fault.

Favorable attitudes do not always lead to trust: Two-thirds of Americans have a favorable opinion of major companies but many aren’t sure they can trust them. According to the survey, only 10 percent say they have a lot of trust and confidence that businesses will behave ethically. And only 43 percent have some trust or confidence in the ethical behavior of big business. Conversely, 46 percent say they do not have much or any trust and confidence. American opinions about ethics and trust also vary by industry. Sectors with the most favorable scores for trustworthiness are manufacturing, technology and large retailing. Those viewed least favorably are pharmaceuticals and health insurance.

The survey findings provide organizations with a range of factors that need to be understood and mastered to build a strong corporate reputation. The results can be used to study public perceptions and attitudes, the degree of favorability and trust towards an organization and actions taken by an organization. Or as Socrates said, “The way to gain a good reputation is to endeavor to be what you desire to appear.”

The full results of the Pulse survey and the methodology can be found at http://pac.org/pulse/.

Sarab Kochhar, Ph.D., is the Director of Research for the Institute for Public Relations. Follow her on Twitter @sarabkochhar.

One thought on “Corporate Reputation Takeaways: Results from the 2015 Public Affairs Pulse Survey”