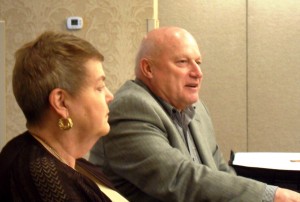 I had the privilege of chairing the Grunig Lecture on Sunday afternoon, October 17, in Washington DC. This was the third in a series of lectures by major figures in public relations practice or education, addressing topics of importance to our profession. This year, PRSA joined the Institute for Public Relations and the University of Maryland in co-hosting the event.

The 2010 “lecture” was delivered by none other than Dr. Jim Grunig and Dr. Laurie Grunig, both now retired and still giants among educators in our field. The challenge to Jim and Laurie was to link their Excellence Studies and research of 25+ years ago with today’s vastly different environment, and to suggest how practitioners use theories and concepts originally developed beginning in the 1960s, with public relations practice today.

Consider Dr. Jim Grunig’s analysis of the impact of digital and social media on public relations:

Jim observed that with social media, many practitioners believe “we’ve lost control of the message. Now people can say whatever they want” (as though public relations people ever could control the message).

“If we go back to my theory on publics developed in the late 1960’s,” Jim said, “it basically held that people are responsible for their own communication behavior. People seek out information that’s relevant to problems they face, following the logic of John Dewey who in the 1920s said: ‘People do not think unless they experience a problem, and when they experience a problem, they begin to inquire.'”

Jim’s point is that we public relations practitioners have been experiencing an “illusion of control.”

“We never could define publics, and we usually couldn’t persuade them to do what the organization wanted them to do.” Now with social media, control is even more of an illusion. Today, members of publics are not constrained by information that media provide. Publics create their own content. They go to each other for information. They can interact with members of the same publics throughout the world. They can create rumors. They can create crises.

“And we need to recognize that public relations practitioners tend to use new media the way they used old media. When television was invented, TV stations had people sit in front of a camera and read the news like they were still on radio. It took a long time before they learned to use pictures and action.”

Many practitioners tend to just dump information into the new media. Too often we still think of digital and social media as a means of publicity or promotion or sales and simply as a way of carrying out communication programs.

“What we tend to forget is that if public relations is indeed a two-way street, then we can also use the new media to do research and bring information into the organization that we couldn’t otherwise do. And this makes the strategic public relations function easier than before because we can follow what people are saying about organizations.”

“In the past, by the time something got into the media, it was too late. Now we can identify when people are first beginning to talk about something on the internet, with sentiment one way or another. Of course we also have to deal with these issues and crises immediately when they occur.

To read the full transcript, visit the Grunig Lecture section of this website.

What do you think?