Fight or Flight: How Americans React to Corporate Crises and Controversies

Many consumers get justifiably upset when a company makes a costly mistake, faces a scandal or is embroiled in a controversy. But why do some controversies grow into crises? And why do some crises “stick” while others fade away in a few days or weeks?

There are many variables in play but, for starters, we need to learn who is most outraged by different crises and what actions they take when a company disappoints them. That’s the focus of a new study by the Public Affairs Council and Morning Consult that examined 21 business crises and controversies.

The poll, which surveyed 2,201 American adults in March 2018, asked respondents how they would react to specific calamities ranging from environmental damage to corporate scandals to major layoffs. The goal was to learn not only how people felt, but also how they might act out their feelings.

Among the crises and controversies considered less serious were ones involving natural disasters (in such cases the public views companies as victims) and situations in which companies are criticized for not going above and beyond the minimum requirements of environment laws.

There are many ways people can respond to a crisis or controversy. For example, they can (A) ignore the problem, (B) grumble to themselves every time they deal with the company, (C) decide to take their business elsewhere, or (D) complain to friends and family. Or they can decide to both fight and take flight.

If they’re really upset, truly teed-off consumers can (E) support tougher regulations or even (F) lead an effort to publicly shame the firm and its leaders.

The study found that many people are more likely to quietly halt purchases from a company than make negative comments about it to others. This was especially true for Americans age 65 and older. In an era of ubiquitous social media, more folks would still rather “walk out” than “speak out.”

For example, if a company were accused of ignoring sexual harassment or racial or gender discrimination in the workplace, 61 percent said they would not remain a customer, yet only 48 percent would publicly criticize the company. Given the ease of complaining to others versus finding a company in alignment with one’s values that sells great products, this sounds counter-intuitive. 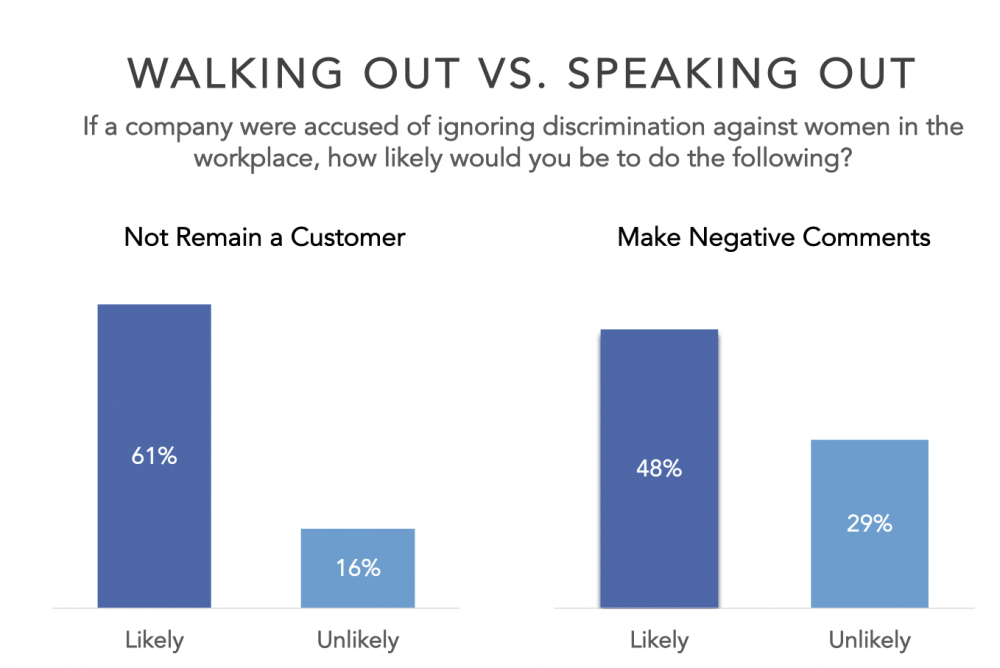 Survey respondents were also asked if they would support tougher regulations for companies accused of “serious moral or legal wrongdoing,” a generic expression of a corporate scandal. Democratic women, in particular, said they would want government to take action, with 73 percent supporting stricter laws. Overall, 69 percent of Democrats would call for tougher regulations, compared to only 58 percent of Republicans.

Other key findings of the survey include:

Greed Doesn’t Play Well. Executive compensation practices are often controversial but they can create a serious crisis for a company that is already struggling financially. If a CEO receives a huge pay raise in a year in which the company loses money, 58 percent of respondents said they would not remain a customer and 30 percent would complain about the issue. Surprisingly, older and wealthier Americans were considerably more outraged about this than younger and poorer Americans.

Older Americans Are More Outraged by Intolerance. While young people are often considered to be less tolerant of sexual harassment and discrimination than older generations, the poll showed the opposite result. In three harassment/discrimination scenarios, there was a direct correlation between age and lower tolerance for bad behavior in the workplace. For example, while 55 percent of 18-29-year-olds felt less favorable about a company accused of ignoring a sexual harassment problem, 77 percent of 55-64-year-olds and 78 percent of those 65 and older felt less favorable.

The Public Values Transparency, Accountability and Sacrifice. The poll tested different responses to a crisis to see what a company could do to earn back the public’s trust. For example, in the case of a company executive caught breaking the law and being quickly fired, one scenario had the company promise to resolve any problems but decline to provide details about a “personal matter.” This approach caused 41 percent to have a more favorable view of the company. But if the company had apologized for the incident and promised to provide updates as problems were resolved, 58 percent had a more favorable view.

One of the most striking results of the study involved a set of scenarios in which a company announced major layoffs. When the firm gave few details about staff cutbacks, only 32 percent of respondents had a more favorable view of the company. Favorability increased to 36 percent when the firm explained that it needed to reduce head count and expenses to preserve other jobs and remain competitive.

The big jump in favorability occurred when the company announced that the CEO and other senior executives would reduce their own salaries by 20 percent until business conditions improve. This effort to share the pain of restructuring resulted in 56 percent saying they felt more favorable about the company. What’s more, the percentage likely to remain a customer increased sharply and the percentage likely to make negative comments declined.

To view the topline results or to watch a livestreamed forum announcing the key findings, visit the Public Affairs Council’s website.