Social distancing and self-isolation aren’t just keeping families apart; they are also separating politicians from constituents and others trying to shape public policy.

Over 70% of 245 government affairs executives surveyed in a new Public Affairs Council poll believe that, even after the COVID-19 pandemic is over, it will remain much more difficult to meet with federal policymakers in person. Nearly one in four executives (23%) strongly agree with this assessment.

At the state level, 53% say face-to-face meetings with policymakers may become a thing of the past, with 13% believing strongly in that point of view. 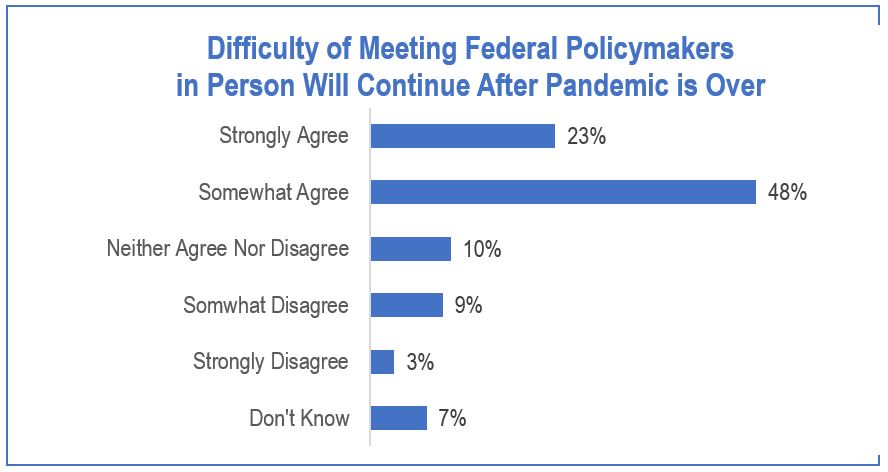 Video Meetings Are Here to Stay

What will replace the handshake and the opportunity to make one’s case directly to elected officials? Two words: “video conferencing.” A whopping 83% of government affairs executives say it will become increasingly common to schedule video conferences with federal and state policymakers and their staffs, rather than meet with them in person. What’s more, 37% strongly agree that Zoom and other platforms will be here to stay long after the virus departs.

Also on the ascendency is digital advocacy. Over 60% think the pandemic will bring about a decline in traditional lobbying and an increase in the use of digital advocacy strategies. These strategies include grassroots campaigns, digital advertising and owned media that promote awareness and engagement in policy issues. Only 23% disagree with this assessment.

Concerns about the pandemic are also likely to affect the 2020 elections, according to the cohort of government affairs executives. Ninety-two percent think it “will have a profound impact” on the elections, including 58% who hold this belief strongly.

Nearly 80% believe the pandemic will make voting by mail much more common — despite President Trump’s opposition to this approach. Nevertheless, a plurality of survey respondents (39%) believe Trump will be elected to a second term in office. Just over 30% think Trump will lose the election, while another 31% aren’t certain. 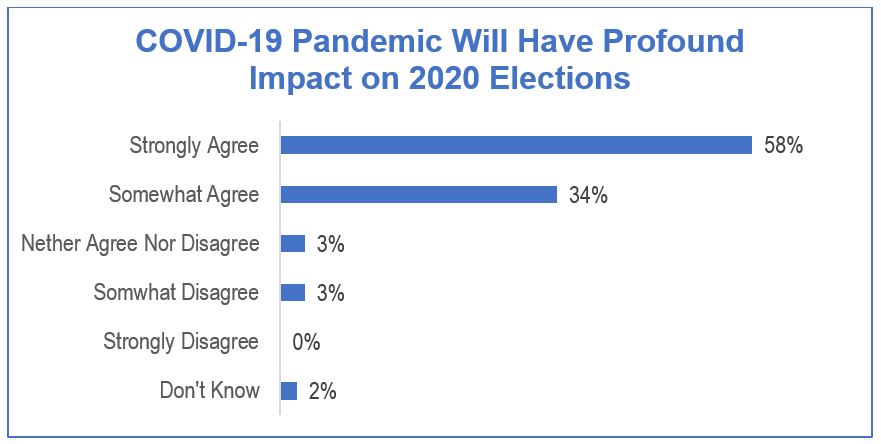 The jobs of government affairs executives are changing in other ways as well. The majority (67%) realize that, for the rest of 2020, federal and state governments will be reluctant to consider policy issues that don’t relate to the impacts of COVID-19.

When asked to forecast major policy changes that are likely to result from the pandemic, the most common responses were the approval of TARP-like loans to businesses (63%), a more restrictive trade policy (55%) and passage of tougher regulations across various sectors to protect the public’s health and safety (47%).

One-in-three executives (34%) believe that healthcare coverage will be extended to more people who are currently uninsured and another third (33%) expect a fundamental shift in healthcare policy to encourage primary, preventive and long-term care and to lower the cost of acute care.

The bad news for government affairs departments is that many are experiencing budget reductions that will greatly decrease their funding through the end of the year. Nearly equal numbers have (39%) and have not (40%) experienced severe budget cuts. Yet, at the same time, more than half (54%) report the pandemic has caused their organization to place a higher value on managing political risk through government relations. Only 11% disagree with that statement.

This survey analysis is based on responses from 245 government affairs executives who completed an online poll in May 2020. The most common responding organizations were corporations (45%), followed by associations (22%), consulting firms/agencies (20%) and non-profit groups (6%). 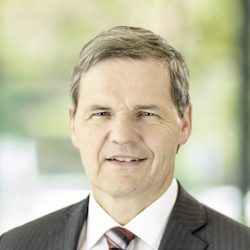 Douglas G. Pinkham is president of the Public Affairs Council, the leading international association for public affairs professionals. More than 600 organizations – including nine out of the top Fortune 10 companies – belong to the Council. Founded in 1954, the Council is a non-partisan, non-political association that provides executive education, “best practice” information, research and thought leadership to the profession. Mr. Pinkham was elected to head the Council in 1997. Prior to joining the Council, Mr. Pinkham was vice president of communications for the American Gas Association (AGA), a major trade association representing natural gas distribution companies.