Here’s a Phrase We Don’t Say Often: Donald Trump May Be onto Something

Posted on September 19, 2016 by Thomas Stoeckle and Chris Scully

This is the third in a series of blog posts for Measurement Month.

A key component of Donald Trump’s campaign strategy has been to dominate in traditional media, as a means to boost his electoral prospects. It proved to be effective during the primary campaign. But when he secured the nomination in June, many wondered how this strategy would translate to a general election campaign. We sought to answer this question using media performance data sourced from LexisNexis’s Newsdesk monitoring and analytics platform and polling data sourced from FiveThirtyEight.com.

First, a little background on our data analysis. We compiled a wide array of metrics from Newsdesk on Donald Trump’s and Hillary Clinton’s U.S. traditional media coverage (print, online, and broadcast) from June 1 to September 7 in major media outlets. This included media such as The New York Times, CNN, Associated Press, MSNBC, Washington Post, USA Today, Bloomberg, Reuters, Fox News, and Fortune. These metrics included article volume, share of voice, automated sentiment analysis, and various metrics derived from these standard media performance results, such as the ratio of positive to negative stories, volume of negative stories, and share of voice by positive and neutral coverage. We aggregated these results into a variety of time-frame increments, ranging from one-day totals and rolling two-day totals, all the way through to rolling ten-day totals. The amount of data we aggregated quickly exploded. Here’s a screen grab of the data for just our one-day totals: 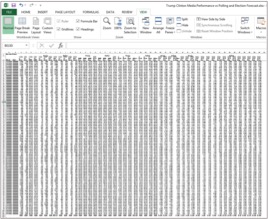 While media performance metrics are interesting to media measurement experts like ourselves, such data alone usually doesn’t inspire much excitement, nor does it tell the complete story. As the Barcelona Principles inform us, the complete story unfolds when you link media performance to organizational results and see if the hard data suggests a cause and effect relationship between the two.

That is what we sought to do with our wealth of media data: compare it to polling results on the two candidates. As such, we compiled the daily polling averages for Hillary Clinton and Donald Trump that were available from FiveThirtyEight.com for the period of June 8 through September 8 (the day we compiled the data).

From there we ran correlation analyses comparing the daily media performance trends (and various time-frame increments of this data) to the daily trends of Trump’s polling average, Clinton’s polling average, and Clinton’s lead based on these averages. While many of these correlation analyses showed nothing meaningful, a number revealed fascinating results, and, like we said, Donald Trump may be onto something.

(We realize that some of you may not be familiar with statistical correlations. As such, here are some good resources for you to learn more about these calculations and what they mean.) 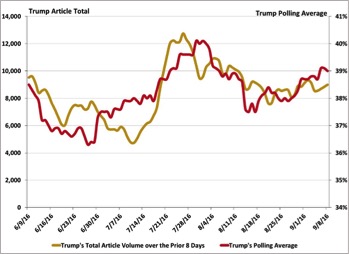 Here’s a different way to look at the same underlying data: 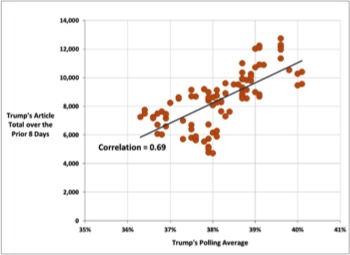 Other time-frame increments for Trump article totals exhibited similarly meaningful correlations to his polling average as well, but the statistical relationship was strongest for eight days’ worth of coverage.

For the Trump campaign, the takeaway is that the data supports Trump’s strategy: more coverage generally has translated to better polling numbers and that the campaign would be wise to continue following such a strategy. Whether this strategy alone is enough to overcome Hillary Clinton’s prolonged edge in the polls is another matter.

Here’s something interesting: our analysis also revealed that Hillary Clinton’s article total over rolling eight-day periods had an even stronger positive correlation to Trump’s daily polling average than did Trump’s eight-day article totals. As such, changes in Clinton’s article volume were more closely linked to changes in Trump’s polling numbers than his own coverage increases or dips. 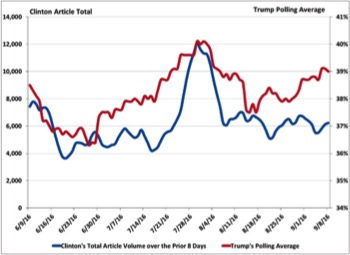 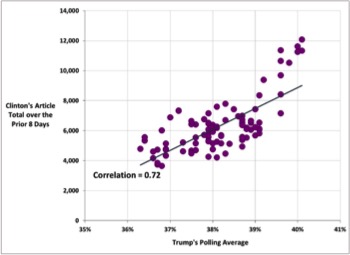 One takeaway from this data for the Hillary Clinton campaign is that an effective strategy would be to minimize coverage on the race as a whole. Of course, this is an impossible strategy to implement, as barring some epic and catastrophic event, the 2016 presidential campaign will be topic #1 of the traditional media until after election day.

However, if you’re a Hillary Clinton campaign official, our data analysis uncovered some strong correlations that could be useful for formulating her PR strategy over the next two months. 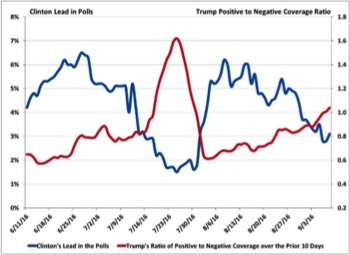 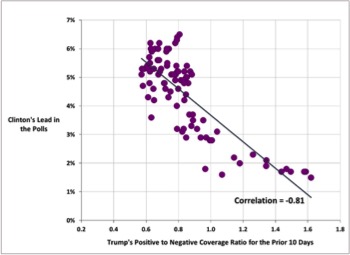 A quick aside, this sentiment data is based on automated scoring done by our Newsdesk analytics platform. We both believe that automated sentiment is not perfect and its results need to be examined with some care. However, autosentiment tools generally are well suited to assessing obvious cases of positive and negative attention. That data derived from this automated sentiment analysis exhibits strong correlations to polling results suggests that obviously positive or negative coverage may be what is most impactful in the context of a political campaign. 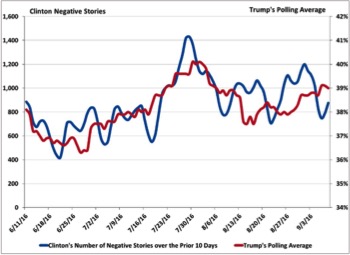 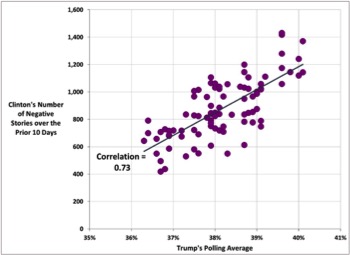 For the Clinton campaign, these results suggest a simple strategy: minimize the amount of negative attention that Hillary Clinton receives, while fostering as much negative attention for Donald Trump as possible (our apologies for the “no duh” conclusion, but we go where the data takes us, even if it’s down a well traveled path).

While many of the conclusions from our data are basic, obvious, and ones that PR practitioners have drawn for decades based on intuition alone, we believe we uncovered some interesting findings concerning the power of the cumulative effect of media coverage. In a fast-paced media environment, PR practitioners are hyperfocused and hyperworried about what can pop up at any one time and dominate a news cycle. However, our results indicate that one or two impactful news cycles are not as meaningful as a media performance trend sustained over the course of a week to ten days. It’s the legs of a major development or the snowball effect, our data suggests, that should be the worry or the goal, not the one big story itself.

As such, PR practitioners should consider crafting their campaigns to generate attention across week-long or 10-day periods, rather than having a flurry of attention for a day or two. While we’re sure PR practitioners would love to prevent any and all bad news from appearing, that’s not a realistic goal. Instead, this data suggests, that when bad news strikes, PR professionals should focus on limiting the damage to a day or two and preventing this unfavorable attention from being prolonged across extended periods of time.

Thomas Stoeckle is the Global Head of Evaluation & Insights at LexisNexis BIS (Business Information Solutions). He is a member of the IPR Measurement Commission. Follow him on Twitter @thomasstoeckle1.