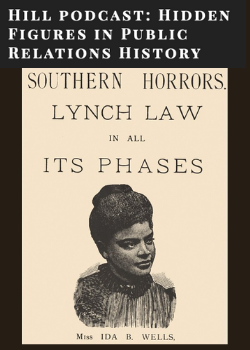 This summary is based on the original webinar material from the Hill Podcast by Dr. Denise Hill.

Dr. Denise Hill spoke about minority public relations pioneers that have been excluded from history on her podcast, Hill Podcast.

Dr. Hill referred to Scott Cutlip’s two foundational public relations textbooks, The Unseen Power and Public Relations, and A History from the 17th Century to 20th Century, to demonstrate how minority pioneers have been left out of public relations history.

Out of the 17 pioneers Cutlip mentioned throughout these textbooks, none of them were minorities. According to Dr. Hill, there were two women mentioned out of the 17 pioneers, and they were mentioned in relation to the men with whom they worked. Cutlip did mention in the prologue of the textbook that the absence of minority public relations leaders was not his choice, but a fact of history.

Dr. Hill mentioned several minority public relations pioneers that could have been included in these seminal textbooks: