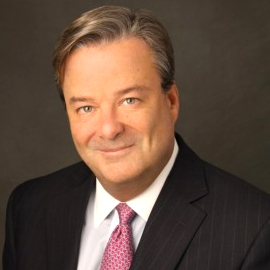 Bill Hughes is responsible for global communications at Pitney Bowes, where he directs the company’s communications with employees, media, and influencers. He also works closely with government affairs, and the marketing and investor relations organizations. Bill has more than 25 years of experience working with both large corporations and small companies in information technology, pharmaceutical, financial services, and consumer products. He has extensive international experience, having lived and worked in London and Tokyo. Prior to joining Pitney Bowes in July 2013, Bill was chief communications officer at CA Technologies, one of the world’s largest IT management software companies. Bill joined CA in 2006 after two years at IMS Health Corporation, the world’s leading market information company to the pharmaceutical and healthcare industry.

From June 1996 to January 2004, Bill worked at IBM Corporation where he held a number of senior leadership positions, including vice president of Corporate Media Relations. Based in Armonk, Bill directed media relations, including financial and corporate communications, as well as industry analyst relations, and served as the company’s spokesperson. In 1998, Bill was named vice president, communications, for IBM Asia Pacific. Based in Tokyo, Bill managed the communications for IBM Asia Pacific and the communications programs throughout Asia Pacific. Bill began his career with IBM as Vice President of Public Relations at the IBM Personal Systems Group.

Prior to joining IBM, Bill was Managing Director of the Los Angeles office of Burson-Marsteller. In 1991, he was named the Managing Director of the London office for WeberShandwick Communications, Ltd. Bill began his career in 1986 at Miller Communications, a large, high-technology public relations firm based in Boston, which later merged with WeberShandwick.

Bill serves on the Advisory Board at the College of Charleston in Charleston, South Carolina, and is a member of several professional organizations including, The Seminar and The Arthur Page Society. He previously served on the Board of Directors at The American Ballet Company in Manhattan, and The Building Committee at The Nathaniel Witherall Nursing Facility in Greenwich, Connecticut.