Gainesville, Fla. – The Institute for Public Relations is thrilled to announce the addition of four new Trustees to its Board: 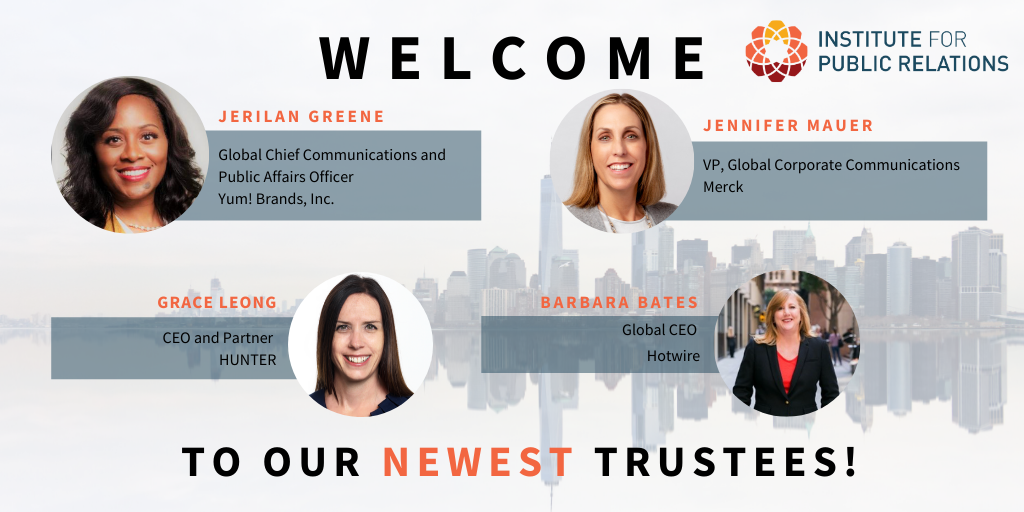 Jerilan Greene is the Global Chief Communications and Public Affairs Officer of Yum! Brands, Inc., parent company of the iconic KFC, Pizza Hut and Taco Bell brands with more than 48,000 restaurants in 140 countries and territories. A leader in global retail development, Yum! Brands open an average of eight new restaurants per day on average.

Jerilan leads the company’s global reputation-building and oversees global communications, government affairs, and sustainability. In 2018, Yum! Brands was named to the Dow Jones Sustainability North America Index and ranked among the top 100 Best Corporate Citizens by Corporate Responsibility Magazine. 2016 was a landmark year for Yum! Brands, as it successfully completed the spinoff of its China business as an independent, publicly-traded growth company. Greene was the central communications and messaging architect for this milestone transaction and for the articulation and launch of a multi-year strategy to transform Yum! into a capital-light pure-play franchisor.

As a leader, Jerilan advocates for an integrated, forward-thinking approach to building a reputation that considers the global and local needs of business and society. A catalyst for change by nature, Jerilan is known for creating a collaborative, inclusive culture of openness, learning, innovation, and support for her team members to contribute their best. Greene is a Gallup-certified StrengthsFinder Coach and has trained as an ontological coach with the Newfield Network.

Prior to Yum! Brands, she was Executive Vice President at global communications marketing firm Edelman. She has also held leadership positions at Deloitte, Burson-Marsteller and Towers Watson. A Page Society member, Greene is a two-time graduate of Northwestern University with a Master’s in Business Administration from the Kellogg School of Management and a Bachelor of Science from the School of Communication. An avid supporter of the performance arts, youth, education and spiritual development, Greene is on the Board of Directors for the Fund for the Arts in Kentucky. Follow Jerilan on Twitter @DaringEveryDay.

Jenn started her career as a journalist with a Master’s degree from Columbia University’s Graduate School of Journalism, completed her MBA from The Wharton School at the University of Pennsylvania and worked as a consultant at McKinsey & Co. before joining Bristol-Myers Squibb in 2005. At BMS, she has worked in nearly every part of the business—including US commercial (with a focus on Oncology) and R&D before becoming the corporate spokesperson in charge of all external communications, standing up the company’s first-ever internal communications function and launching the company’s cornerstone employee engagement campaign Who Are You Working For? Jenn likes to solve business problems and enjoys using her communications expertise as a resource to help companies’ most senior executives create solutions that drive business objectives.

Jenn earned her undergraduate degree from the University of Richmond. She lives in Pennsylvania along the Delaware River, likes to run and bake, and spends most weekends watching her daughters’ soccer games or rowing events. For the past ten years, Jenn, her parents, her husband, and their daughters have worked with an organization that builds schools in rural Guatemala. Most recently, they traveled to Guatemala to open a school built with funds raised by their daughters.

Grace Leong, APR
Grace Leong is a passionate advocate for the modern practice of integrated marketing communications. Recently named a “Champion of PR” by PRWeek magazine, Grace elevates the role of PR in the marketing mix among HUNTER’s best in class clients in consumer products and services by infusing programs with new technologies, resources, and solutions that drive business results.

In a career spanning 30 more than years, Grace has conceived and led of dozens of award-winning communications programs and initiatives for Fortune 100 consumer products companies including 3M, Johnson & Johnson, Church & Dwight, and Pompeian. Classically educated and credentialed as both a public relations professional and marketer, Grace embraces her role as the female lead of a diverse communications consultancy which is driven by creativity, exceptional client service and a dedication to achieving measurable business results.

Inspired by a foundation in earned media, Grace has driven the evolution of HUNTER into new services, new territories, and new industries through her ability to recognize the sweet spot between her client’s evolving communications needs and staff’s talents, and funneling investment into their development, while delivering best in class results for the clients that partner with Hunter.

Not a fan of the spotlight herself, Grace believes doing great work every day sets the best leadership example, and is most often found in the “brainstorm room” driving the next big idea or and at the IMC table contributing best-in-class PR strategy. Her skills as a communications expert come in handy at home as well, as the mother of four young adults who enjoying challenging their parents with their own academic and athletic objectives.

An accredited member of the Public Relations Society of America (PRSA) and the Arthur W. Page Society, Grace has served the public relations and marketing industry in numerous leadership positions. In 2016, she was awarded the PRSA-NY John W. Hill Award for lifetime achievement in public relations. Grace earned a BA from the University of Delaware and an MBA from Rutgers University. She was named Delaware’s outstanding alumni in 2013 and inducted into the University’s Alumni Hall of Fame in 2016 for lifetime professional achievement and service to the Blue Hen Community.

Barbara Bates
Barbara Bates is Global CEO of Hotwire, a global communications agency in 11 locations worldwide Bates drives the strategic direction of the business overseeing a global leadership team. Prior to Hotwire, Bates spent 26 years building her own agency, Eastwick, into one of the most preeminent technology-focused communications firms in the country, before it was acquired by Hotwire in late September 2016. Barbara and her team work on some of the world’s biggest technology brands to create high-impact communication strategies. She was named in Business Insider’s 2014 list of 50 Best Public Relations People in Tech and one of the Top 5 Women in PR by the PR World Awards. In 2018, Barbara was recognized as one of the “Most Influential Women in Bay Area Business” by the San Francisco Business Times. Bates started her career as a television reporter and has lived most of her life in Silicon Valley. Follow Barbara on Twitter @barbbq.

About the Institute for Public Relations
Founded in 1956, the Institute for Public Relations is an independent, nonprofit foundation dedicated to the science beneath the art of public relations™. IPR creates, curates, and promotes research and initiatives that empower professionals with actionable insights and intelligence they can put to immediate use. IPR predicts and analyzes global factors transforming the profession, and amplifies and engages the professional globally through thought leadership and programming. All research is available free at www.instituteforpr.org and provides the basis for IPR’s professional conferences and events.