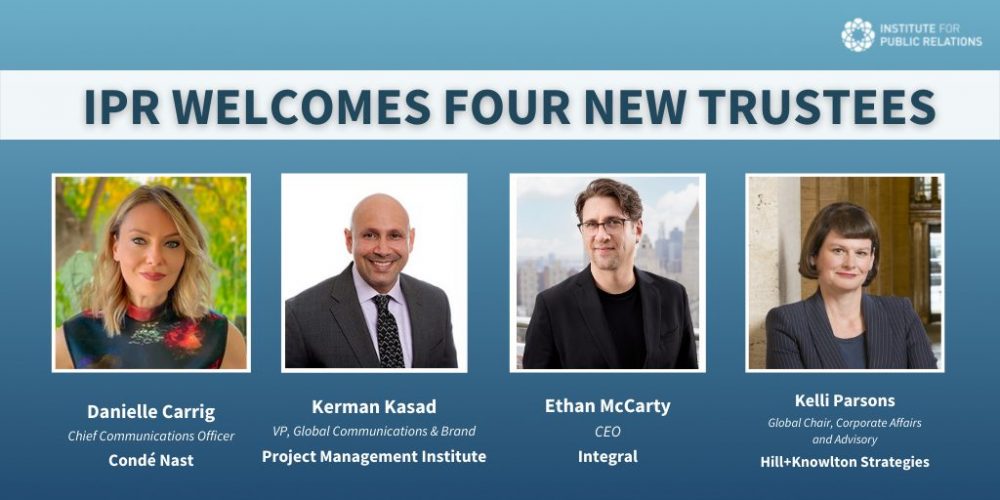 Gainesville, Fla. – The Institute for Public Relations is thrilled to announce the addition of four new Trustees to its Board. 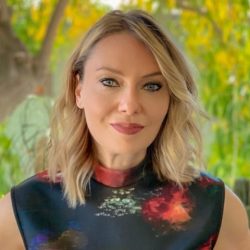 Danielle Carrig is Condé Nast’s first global Chief Communications Officer where she oversees all communications strategy for the business and portfolio’s 37 brands spanning Vogue, Vanity Fair, GQ, Wired, The New Yorker, and more in 32 markets. Condé Nast is one of the top 50 largest privately held companies in the world, producing media’s leading print, digital, video, social and event content reaching over 1 billion consumers every month. Beyond Condé Nast, Carrig has spent the last decade as a media and entertainment executive working for today’s largest consumer brands across television, streaming, film, news and publishing.

Most recently, Carrig served as VICE Media Group’s Chief Communications Officer, overseeing the company’s communications strategy across its 35 offices worldwide. She helped lead the acquisition of Refinery29 and charted the company’s positioning as the world’s largest youth media company through its digital, television, studio production, news and creative agency offerings. She also contributed to transforming the company’s mission with major achievements in pay parity and the prioritization of diversity and inclusion efforts. Previous to that she was the Head of Creative Communications, Operations and Industry Relations at Netflix where she guided global teams to maximize exposure for the over 100 titles launched every month across scripted, unscripted, documentary and feature film content.

Carrig began her career in media as Senior Vice President, Communications and Public Affairs for Lifetime at A+E Networks, where she oversaw the communications strategy for the network, in addition to leading the company’s public affairs efforts, which received the Television Academy’s prestigious Governor’s Emmy Award.

She has been recognized by influential organizations and media outlets including the Alliance for Women in Media and Dress for Success as their for her work advocating on behalf of women. Variety named Carrig to their list of Hollywood’s New Leaders featuring executives under the age of 40. She has also been recognized by her alma mater, Valparaiso University, as alumnus of the year and received the Woman of Achievement Award from Century City Chamber of Commerce in Los Angeles.

Prior to joining Lifetime, Carrig was Executive Director of Step Up, a national non-profit organization based in Los Angeles. There she directed the organization’s objectives of building educational programming for underserved girls while managing the organization’s three offices in Chicago, Los Angeles and New York. In her four years as executive director, revenue increased by 600% and the organization became one of the most sought after women’s groups in the country.

Carrig holds an M.A. in women’s studies from UCLA, where she focused on the implications of U.S. foreign policy on women’s reproductive health in the developing world. While there she also worked for the esteemed academic publication, Signs: Journal of Women in Culture and Society. 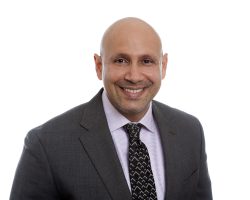 Kerman joined PMI in 2020; he provides strategic counsel to the CEO and executive leadership, members of the Executive Leadership Team, enabling them to tell the PMI brand story and what the organization delivers to its stakeholders around the world.

Before joining PMI, Kerman worked for large global technology, and IT consulting companies, including Symantec, Persistent Systems, and ARC Document Solutions. Prior to joining PMI, he served as Vice President of Marketing and Corporate Communications for Nihilent — a leading IT consulting and services, an NTT group company. 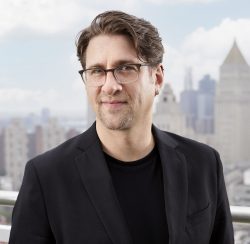 Ethan McCarty, CEO, Integral
Ethan is the founder and CEO of Integral, an employee activation agency serving leaders of Communications, HR, Marketing and Technology at organizations global and local alike. Formerly the global head of Employee and Innovation Communications for Bloomberg LP and Global Director of Social Strategy for IBM, Ethan has more than 20 years of experience leading digital communications, engagement and marketing initiatives at scale. Ethan has led large globally and culturally diverse remote teams by innovating and humanizing the practice and advising senior leaders from the CEO down among his clients on how to do the same. He is a lecturer at Columbia University on Employee Activation and Digital Media & Analytics. 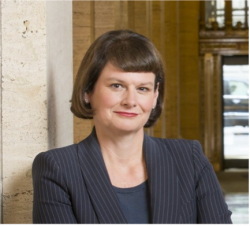 As Chief Communications Officer (CCO) at United Technologies, Kelli created the multi-stakeholder communication strategy during the company’s transformation, including its acquisition and integration of Rockwell Collins, spins of Carrier and Otis and $74 billion merger with Raytheon.

Previously, Kelli served as CCMO of New York Life and CCO of Fannie Mae during its historic turnaround, for which PRWeek recognized Kelli as a most powerful leader and Fannie Mae as team of the year. She began her career as an Emmy and Murrow award-winning television journalist.