Posted on October 9, 2015 by Juan-Carlos Molleda 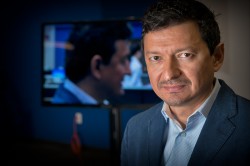 For 15 years, I studied transnational crises from a theoretical perspective, which I have come to refer to as cross-national conflict shifts (CNCS). In that time, I never experienced a corporate crisis – caused by the decisions and actions of a global corporation – as full-blown as the case of the Volkswagen Group (VW). I said I never experienced it because I am actually a victim of the situation, which forces me to acknowledge and leave my bias out as an objective researcher.

On September 18, news broke that the Environmental Protection Agency (EPA) found that many VW cars being sold in the United States had devices in diesel engines that could detect when they were being tested, changing the performance accordingly to improve results. VW has since admitted cheating emissions tests in the U.S.

Virtually, at the speed of light, we saw this crisis progress: from a government agency issuing notice of legislation violation, to a quick corporate acknowledgement of responsibility; from the resignation of the “shocked” CEO, to the appointment of a new leader; from the cancellation of advertisements, to the promise that the corporation will do “everything that must be done” to restore trust in Volkswagen.

My research on transnational crises indicate that pressure will come from all directions for a global corporation. There will be major scrutiny from the home country where a corporation is headquartered, in this case from shareholders, employees and the German government. The global reaction to transnational crises depends on how coordinated, consistent and localized responses are in the affected or influential world locations (host countries). I am upset about how Volkswagen deceived me and many others loyal customers; I am even considering the thought of joining a class-action lawsuit. However, I am also fascinated – as a public relations professional and invested consumer – by the multiplicity of platforms Volkswagen is using to reach primary and secondary stakeholders both in its home and host countries, where they manufacture and do business. 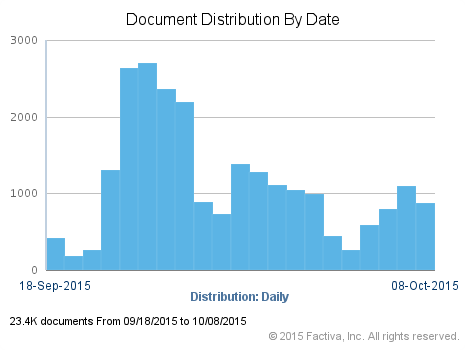 It is no surprise that the largest news coverage happened in Germany, United Kingdom, and United States, which is also predicted by theories such as news flow, news values, and CNCS. The news and digital coverage peaks incrementally, but also mirroring a normal curve or crisis cycle, follow major events:

The idea to present these numbers and the media coverage is not to start a discussion around the content of the media coverage but rather the context of the crisis. As a consumer, I engaged in a virtual conversation with a Customer Care representative who was well-trained on the current key messages, but who also took additional steps to learn about who I was and to document my case. I received a letter that includes the key messages, which are repeated on multiple platforms such as the corporate website, a new dedicated portal www.vwdieselinfo.com, social media, and other traditional and digital channels. The featured messages in the letter included: an admission of guilt, an apology, a statement of shared values that contrast their infamous action, a notice of collaboration with authorities, safety assurance, a statement of no further actions needed by owners, a statement of fact gathering, the search for optimal remedy, a plead for patience and chance to make things right, provision for an open line of communication, and an assertion that they will survive and recover my trust.

To be successful in this situation, the global player needs to be fast moving to address host-country (U.S.) publics’ concerns and need for information. The president and CEO of Volkswagen Group of America, Michael Horn, is the main spokesperson whose voice and face are carefully orchestrated to deliver apologies to dealers at a meeting in Brooklyn, NY; to customers like me on the crisis website, and the letter addressed and signed to me. Furthermore, VW issued apologies to employees through in-house meetings, intranet and public video. The general public has been also mentioned in some communications tactics.

My fascination is with why VW did not come clean before the U.S. Environmental Protection Agency made the legislation violation public. CNCS additionally contributes to the conversation about the need of issues monitoring and management, and the understanding of the great consequences of a transnational crisis. The head of U.S. Volkswagen knew about the potential trouble with diesel emissions since spring 2014, which is much earlier than the acknowledgement made by top U.S. management. Despite the full-force responses to this scandal, the fact is that VW lied and will suffer great financial and reputational losses. This is an evolving case that professionals and scholars need to observe closely to learn the lessons of a dynamic global crisis.

Juan-Carlos Molleda, Ph.D., is a professor and chair of the Department of Public Relations at the University of Florida and a Trustee for the Institute for Public Relations.