What Anthony Bourdain Gave us Without Reservation: Lessons from the Master in Cross-Cultural Communication

As the world mourns the passing of Anthony Bourdain, we, as we often do when someone great leaves our midst, are struck by the indelible impression he has made on us and what we took away from our relationship with him. His storied career, launched from a single article that was published in The New Yorker, much to his surprise, got him a book deal, which led to unimagined success, and celebrity status that only accelerated throughout his life.

I did not know Anthony Bourdain and came to know him, like millions, as a fan watching his shows on TV on the sofa of my living room and through his books beneath the reading lamp of my nightstand. His energy, intellect and insatiable curiosity transcended countries and cultures. From Bourdain we learned many important cross-cultural lessons. These are lessons each of us can directly benefit from with the work we do as PR and marketing practitioners and global citizens. 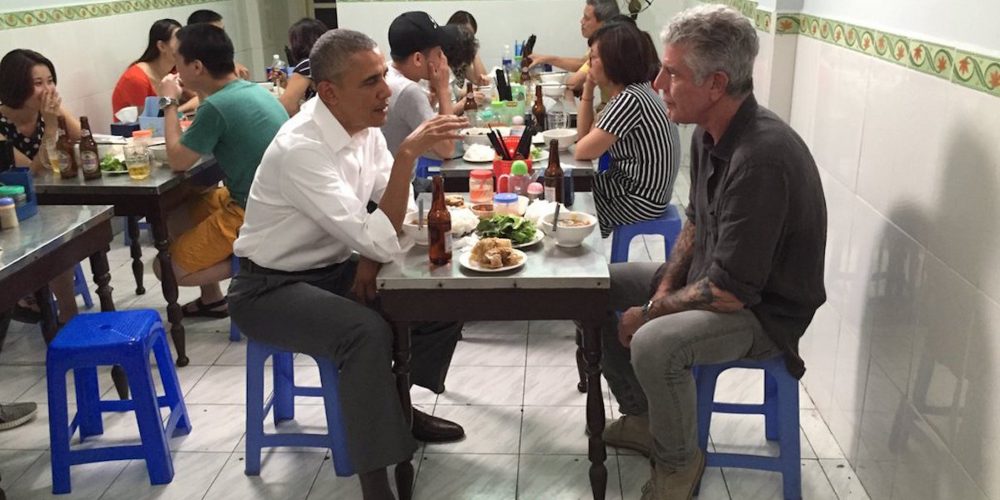 Candidly, many of us struggle to find ways to connect across boundaries and cultures, whether real or imagined, and seek out ways to be relevant and relatable. Bourdain did not suffer that affliction. In fact, he set a pace that few can keep up with.

In reflection of Bourdain’s work and life, this simple list provides some insights about his many accomplishments. We can keep this in front of us when thinking how to be more culturally relevant. We can ask ourselves,

“How would Tony, as his friends called him, handle this situation, respond to this person or find ways to connect?”

This list is not a synopsis of his many accomplishments and what we can learn from him. I could not hope to come up with anything close to that. But it does offer some thoughts as to how we may extend his work to our own and in that have better and more meaningful relationships, regardless of the geography.

Simplicity, and without pretense: Bourdain comprehended the value of the shared experience. Cultures have distinctive ways through food and cuisine to differentiate themselves. Bourdain shared meals with famous and not so famous in “Parts Unknown” and he sought to find distinctive dishes, flavors and settings.  It is in the simplicity of the connection through a shared experience and understanding that he exhibited the ability to connect cross-culturally. But Bourdain had even more … he lacked pretense.

A Los Angeles Times article stated, “Bourdain wrote for the people with sheet pan burns on their arms and bits of flour stuck in their hair; for the people who found the deepest parts of themselves inside the stinking cavities of the pigs they were breaking down for dinner service; and for the people who cursed equally well in English and in Spanish. His best pieces tended to be not about great chefs, but about people like the cook who cut every piece of fish served at a three-star gastronomic temple but who had never eaten in the restaurant.” (Gold, 2018). Bourdain was the everyman’s man, the cool father, and the guy everyone wanted to know. His lack of pretense gave him a charisma all his own.

Openness:  Anthony Bourdain traveled the world and was open to eating all kinds of food… a snake heart, raw eel eyeball and a developing egg embryo complete with feathers. His willingness to try different types of cuisine with a zeal and enthusiasm suggested an uncanny openness to culture that is hard to match.  While this is not to suggest that the rest of us go out and dine on exotic mystery meats, it does suggest the importance and value of not discounting other cultures simply because they are not in our own backyard and we have never experienced them. Bourdain did not cut himself off from experience…his openness defined him.

Style: Distinctly direct and full of energy, Bourdain found ways in which to put his own imprint of his cultural experience that was uniquely Bourdain. Very New York, Bourdain was direct, funny and eloquent. He had his own vernacular. He was colorful and enthusiastic. His openness and respect for differing cultures allowed him to exhibit that style without hesitation, regardless of the location. And that style fueled his success and innovation. Bourdain was able to “develop and pioneer an entirely new form of early reality TV that freed him to immerse himself, scriptless, in the experiences he chose” (Hayward, 2018).

Raconteur and Storyteller Extraordinaire: “When people tell their stories to each other and are heard, magic happens. People bond. Barriers dissolve. Connections are made. Trust increases. Knowledge is transmitted. Wisdom is shared. A common language is birthed.” (Ditkoff, 2017). Bourdain understood this. He was a master raconteur and storyteller. His grittiness, vivid imagery and use of profanity made us all the more want to listen and learn. He opened our eyes to other parts of the world, people, cultural elements, sights, sounds, and smells while almost tasting dishes we had no familiarity with.  Through his distinctive storytelling, we traveled with Bourdain to Beirut, the Democratic Republic of Congo, Libya and countless other places and got to experience them almost firsthand due to his unique ability as a storyteller.

Principled: His support of the #metoo movement, as a result of his girlfriend actor, director and activist Asia Argento’s experiences and connection to this topic, made Bourdain become outspoken about sexual harassment and assault and the treatment of women in the workplace.  It made him reflective of his and others’ behaviors and the societal standards that he came to abhor, call out and admonish. He became an early and frequent outspoken rare male celebrity voice in the disturbing #metoo reality. His principled leadership enhanced his credibility as a person of empathy and understanding. These are baseline requirements of cultural appreciation and decency.

Anthony Bourdain’s lessons will keep on giving long after his passing. New York restaurateur Martin Butera when reflecting on him said, “Bourdain connected to people, he had an adventurous personality that worked both culinarily AND culturally.”  Indeed, his work sets a standard of its own that will continue to connect, engage and inspire. That, among numerous other gifts, is the legacy that he has left us. We will miss him deeply.

Jacqueline Strayer is a faculty member at NYU in graduate programs in public relations and marketing and the former CCO of three global publicly traded companies.  She consults on a variety of public relations and marketing issues and likes to cook for friends and family and travel to parts unknown to her, in her spare time. You can reach her at jfs2002@nyu.edu. Follow her on Twitter @jfstrayer.

Ditkoff, Mitch. (2017). “Why Create a Culture of Storytelling?” Huffington Post.

Gold, Jonathan. 2018. “Anthony Bourdain opened the working-class kitchen to the world and the world to us”. Los Angeles Times.