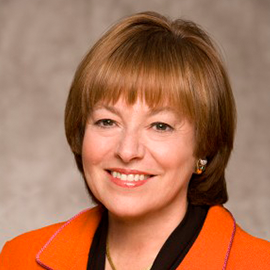 Margery Kraus, founder and chief executive officer of APCO Worldwide, a global consulting firm headquartered in Washington, D.C., specializes in public affairs, communication and business consulting for major multinationals. Kraus founded APCO in 1984 and transformed it from a company with one small Washington office to a multinational consulting firm in major cities throughout the Americas, Europe, the Middle East, Africa and Asia. In September 2004 Kraus led a management buy-out of her firm, making APCO one of the largest privately owned communication and public affairs firms in the world.

She has also helped to make APCO a thought leader in the areas of international public relations, public affairs and business diplomacy. APCO’s International Advisory Council and Global Political Strategies groups bring together more than 60 of the world’s most experienced global leaders, including former politicians, diplomats, business and industry executives, journalists, and academics.

Prior to founding APCO, Kraus helped to create and develop the Close Up Foundation, a multi-million dollar educational foundation, where she still serves on the board of directors. She is also active on other institutional and corporate boards and committees, serving as a trustee of Northwestern Mutual, the Arthur W. Page Society, the Catherine B. Reynolds Foundation, the Eurasia Foundation and the Institute for Public Relations; and as chairman of the Women Presidents’ Organization and past chairman of the Public Affairs Council and the Council of Public Relations Firms.

Kraus’ achievements have been recognized through a number of prestigious awards, including receiving the Arthur W. Page Society’s Hall of Fame Award (2011) and the Institute for Public Relations’ Alexander Hamilton Medal for lifetime contributions to professional public relations (2010); being named to the Washington Business Hall of Fame (2009) and the Enterprising Women Hall of Fame (2009); and being awarded the Ernst & Young Entrepreneur Of The Year® Award in the Services category in Greater Washington (2006) and Washington PR Woman of the Year (2006).

Kraus holds a Bachelor of Arts and Masters of Arts in Political Science and Public Law from the American University.