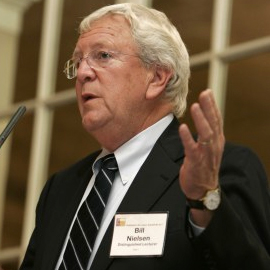 Willard D. “Bill” Nielsen is a management communications consultant. He specializes in organizational vision and values, corporate communications, public relations, public affairs and corporate coaching, drawing on experience gained over 30 years in both industry and agency leadership positions. Mr. Nielsen serves on the Boards of Trustees of The Robert Wood Johnson Foundation, The Arthur W. Page Society and The Josephson Institute of Ethics. He also serves on Advisory Boards for the TEDMED Conferences, The Arthur W. Page Center for Integrity In Public Communications and The Foundation for America’s Blood Centers

Mr. Nielsen retired as Corporate Vice President, Public Affairs, of Johnson & Johnson in 2004, after 17 years with the Company. He joined Johnson & Johnson in 1988, following 18 years as a public relations agency consultant with Carl Byoir & Associates and Hill and Knowlton

Mr. Nielsen was a Trustee of the New Jersey Symphony Orchestra for ten years, and a Board Director of the Foundation of Children’s Hospital, National Medical Center, Washington, D.C., for eight years.

He served two terms as president of the Arthur W. Page Society and was inducted into that organization’s Hall of Fame in September 2003.  He is a past chairman of The Seminar. He also chaired the board of the Institute for Public Relations and continues as an emeritus director, and served on the Board of Directors of the Global Public Affairs Institute. He is a member of, The Wisemen and the Public Relations Society of America.

Mr. Nielsen is a native of Sacramento, California.  Following graduation from Oregon State University, he served for five years as a public information officer with the U.S. Air Force.  He is married and is the father of three daughters.  He and his wife, Doris, live in Maryland where they are both active in community service.