Gainesville, Fla., — The Institute for Public Relations (IPR) has elected Brian Besanceney, Senior Vice President and Chief Communications Officer of Walmart, to its Board of Trustees. 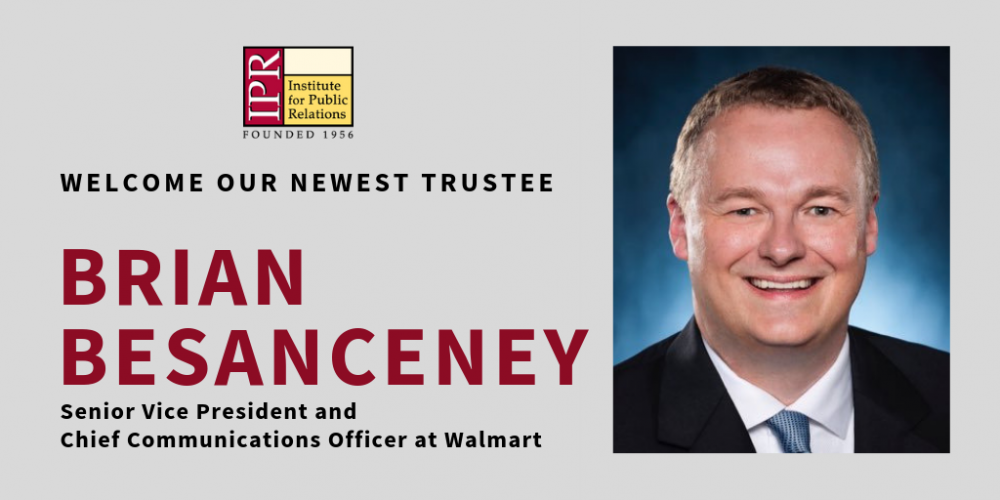 He currently serves as Senior Vice President and Chief Communications Officer for Walmart, where he is responsible for enhancing the company’s brand reputation with key internal and external audiences, including influencers, associates and customers. He leads Walmart’s global corporate external, internal, digital and executive communications team, as well as the company’s special events team.

Prior to joining Walmart, Brian served as Senior Vice President of Public Affairs for Walt Disney World, leading external and internal communications and worldwide government and industry relations for Disney’s Parks & Resorts division. Brian joined Disney after serving as Deputy Chief of Staff to Secretary of State Condoleezza Rice at the U.S. Department of State. He also served as Assistant Secretary for Public Affairs at the U.S. Department of Homeland Security.

From 2001-2005, Brian served in the White House under President George W. Bush, including two years as Special Assistant to the President and Deputy White House Communications Director for Planning. Previously, he served as Communications Director for then-U.S. Rep. (now Senator) Rob Portman and as public relations and government relations consultant.

Brian also serves on the board of Orlando Health, a multibillion-dollar not-for-profit hospital system in Central Florida, and previously served on the boards of the Trust for the National Mall and the Florida Chapter of The Nature Conservancy.

About the Institute for Public Relations
The Institute for Public Relations is an independent, nonprofit research foundation dedicated to fostering greater use of research and research-based knowledge in corporate communication and the public relations practice. IPR is dedicated to the science beneath the art of public relations™. IPR provides timely insights and applied intelligence that professionals can put to immediate use. All research, including a weekly research letter, is available for free at www.instituteforpr.org.