Posted on February 10, 2021 by Institute for Public Relations 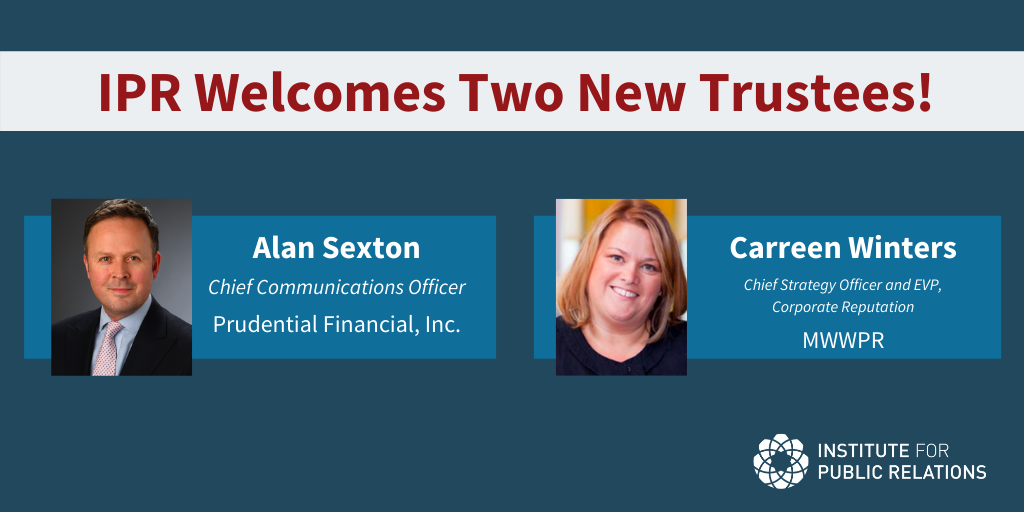 Gainesville, Fla. – The Institute for Public Relations is thrilled to announce the addition of two new Trustees to its Board:

Previously, Sexton led communications for Prudential’s domestic and international businesses, including its global asset management arm, PGIM, while also serving as head of strategy for the communications function.

Sexton spent almost twenty years as a communications consultant before joining Prudential, advising business leaders at Fortune 500 corporations across a range of heavily-regulated sectors, including the financial services industry. He was U.S. vice president at Burson-Marsteller, now Burson Cohn & Wolfe, where he led the firm’s corporate and financial, technology, and healthcare practices in the U.S. market. Sexton also managed Burson’s flagship office in New York.

Before that, Sexton led the communications and digital team at Global Strategy Group (GSG), a leading public affairs and research consultancy, where he oversaw talent recruitment and development, client service, new business development and cross-practice integration. Prior to GSG, he co-founded and led the New York public affairs practice at Ogilvy, one of the world’s largest branding, marketing and communications firms.

Carreen Winters
Carreen Winters is the Chief Strategy Officer and EVP of MWWPR’s Corporate Reputation practice. For nearly three decades, Carreen has served in an integral role building the agency’s Corporate Reputation practice, including leadership of the firm’s largest and longest standing client relationships. Carreen is recognized for her ability to develop insights swiftly in complex situations and for her strategic work for businesses in transformation, as well as deep expertise in crisis and issues management.

As Chief Strategy Officer, Carreen leads thought leadership initiatives across the agency, evaluating new and emerging trends in business and society and their implications for communicators and the practice of public relations. She is the architect of some of MWWPR’s core methodologies, including the agency’s CorpSumer philosophy, research, and thought leadership, which provides a roadmap for integration of Corporate Reputation and Brand Reputation. Additional noteworthy contributions include the development of MWW’s Crisis Action Protocol, with AI implementation for crisis planning and response, and creation of its CEO EquityBuilder and Social CEO programming which have been adopted across the agency’s practices and categories.

Carreen earned a B.A. from Villanova University, and was named to NJBIZ’s 40 Under 40 for her expertise in crisis management and corporate restructuring. She was also named to PR News’ Inaugural Top Women in PR list and PR News’ Blogger of the Year, and her client work has been recognized by every major award in the industry. A recognized author, blogger and speaker on reputation management, Carreen frequently provides expert commentary on reputation management, including serving as a regular commentator in The Wall Street Journal’s “Crisis of the Week.”