Long-Term Growth Will be Driven by Content and Digital but Will Demand Different Talent, Bolder Ideas and Better Measurement 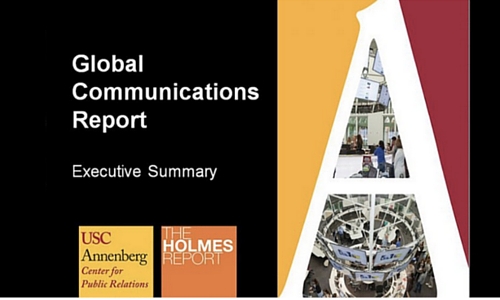 Gainesville, Fla., April 19, 2016 – The USC Annenberg Center for Public Relations today released an executive summary of its Global Communications Report, a comprehensive survey of senior public relations executives, which predicts the worldwide PR agency business will grow from its current estimated size of $14 billion to $19.3 billion over the next five years.  To accommodate this growth, agency leaders anticipate their headcount will increase over the same period by about 26%.

Industry leaders, both in agencies and in-house, believe future growth will be driven by content creation and social media, as well as more traditional activities such as brand reputation, followed by measurement and evaluation. Earned media still ranks relatively high for both corporate and agency leaders.  Paid media ranked last of 18 possible growth drivers.

“Overall, we are sensing a continued optimism about the direction the industry is headed, which is good news for people entering the field,” said Fred Cook, Director of the USC Center for Public Relations. “But questions remain about the industry’s ability to attract the right talent, adapt to new technologies and increase the level of investment required to capitalize on these opportunities.”

Both agency and corporate executives strongly agree that the ability to attract and retain the right talent is their greatest challenge and the majority of both groups believe the PR industry is not good at sourcing talent from outside its ranks, citing salary levels as the major obstacle.

Traditional expertise still tops the list of skills communications departments and PR firms view as key to success over the next five years. Written communications is the skill ranked most important by client and agency respondents.  When asked what personal traits they felt were critical for the future, industry leaders ranked traditional values of teamwork and hard work near the top — but they also believe their teams are already strong in these areas. They say more horsepower is needed in curiosity, creativity and critical thinking.

When asked about diversity, only 45% of agency heads and 44% of corporate executives believe their ranks are as diverse as their clients’ customers or stakeholders. Both groups cite lack of access to diverse talent at senior and entry levels as the primary challenge.

“It’s clear that finding the right talent is by far the most critical factor in the PR industry’s future growth,” said Cook. “The more complicated question is what skills should this talent possess. Industry leaders still value traditional communications skills but are searching for more strategy, creativity and diversity.”

Most survey respondents also anticipate change in the structure of their agencies and departments to better address changes in the communications landscape over the next five years, primarily driven by the adoption of new technologies and increased demand for content delivery across more channels. There is universal agreement that over the next five years, executives will be expected to deliver more strategy, more creativity and more measurement.

By 2020, agency leaders expect to see their revenue streams shift away from earned media, but it will still be the dominant revenue driver at 36%. Meanwhile, all of the other media categories will grow  — owned to 24.6%, shared to 24.2% and paid to 12.9%.  In total, PR executives predict 63% of all media outlets will offer paid placement opportunities in five years. Ironically, only 8% rank media buying skills as an important staff skill for the future.

“The pace of change in public relations has never been faster than it is today, but at the same time, it will likely never be this slow again,” added Paul Holmes, editor of The Holmes Report, which partnered on the research. “Both agencies and their clients recognize that change is occurring, but it is not clear that they appreciate the extent, when it comes to finding non-traditional talent or developing non-traditional services, particularly outside of earned media channels.”

Looking to the future, it is clear that PR as a profession is evolving.  All survey respondents agree that in five years their jobs will become more complex, challenging, and strategic.  Only 27% of agency leaders believe by the year 2020 the term “public relations” will clearly and adequately describe the work they do.

To read the GCR Executive Summary in its entirety, please visit annenberg.usc.edu/cpr