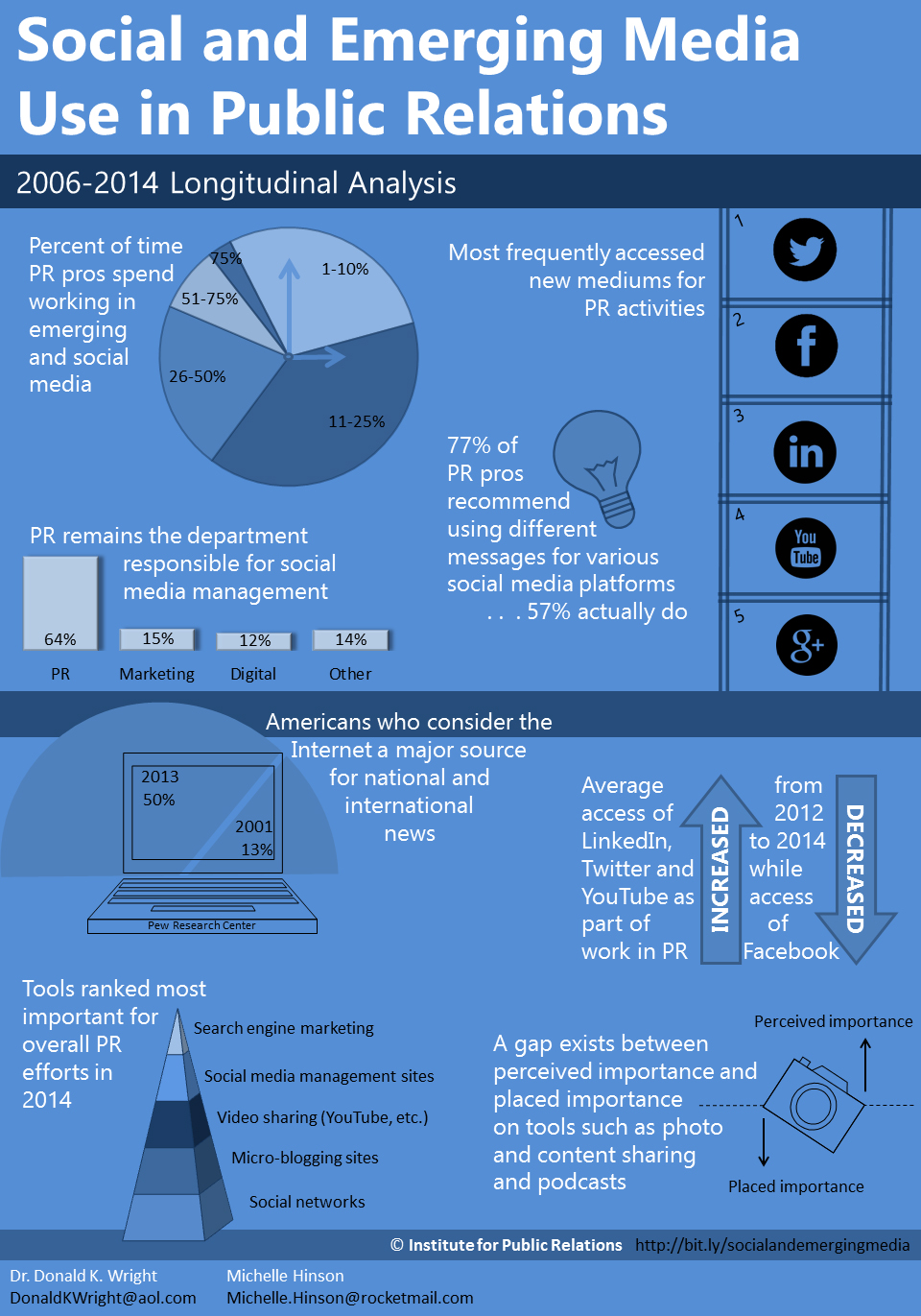 For the past eight years, we have conducted an annual survey measuring how social and other new media technologies are being used in public relations practice. Results of our research have been published in various journals and each year we’ve given reports about our findings to audiences at academic and practitioner conferences.

Our research has found that various new emerging and social communication media have brought dramatic changes to many aspects of public relations practice. Results across all nine years of our studies suggest that the development of various new and emerging technologies has significantly empowered a wide variety of strategic publics by giving them dynamic ways communicate with a variety of internal and external audiences.

Highlights of our 2014 results include Twitter narrowly replacing Facebook for the first time as the most frequently accessed new medium for public relations activities. LinkedIn and You Tube placed third and fourth. Google+ continues to struggle in these measures. For the third year in a row, our research found the influence of traditional mainstream news media continuing to weaken.

This year’s results also found considerably more support for the suggestion that blogs, social and other emerging media are enhancing public relations practice and that social and other emerging media continue to influence traditional mainstream media. Our findings show those who practice public relations continue to agree strongly that social and other emerging media are changing the way public relations is practiced. This impact continues to be much more pronounced for external than internal audiences. In terms of how social media are impacting communication strategy, 2014 results found most (77%) recommend using different messages for various social media platforms, but only 57% of their organizations actually do disseminate different messages for different social media platforms.

During the past six years of this research we’ve been closely watching which organizational function is responsible for monitoring and managing social and emerging media communication in organizations. Results show that although a clear majority believe this should be the responsibility of communications and public relations although the recent emergence of digital and/or social media departments certainly has picked-up some support.

Results in 2014 suggest the percentage of time public relations practitioners spend with blogs, social and other emerging media during their workdays is leveling off. Findings on this item are fairly similar to results from 2012 and 2013. This year three percent of our respondents told us more than 75% of their time is spent working in social and emerging media; 8% said they spend between 51% and 75%; 21% spend between 26% and 50%; 39% answered between 11% and 25%; 28% responded between 1% and 10% and 1% told us they do not spend any time working in those areas.

As part of these annual studies we also explore how social and other new media public relations use is being measured and evaluated. In spite of considerable rhetoric about the importance of this research, we continue to find fewer than half of the public relations practitioners we have surveyed work for organizations (or have clients) that have conducted research measuring what is being communicated about them via social media, blogs and other emerging media. The percentage of organizations conducting these measures grew from 38.6% in 2009 to 45.9% in 2014. In spite of these low measures, those who work in public relations continue to tell us they strongly support the idea of conducting new media research and measurement.

Another problem we have found in the category of research, measurement and evaluation is most of the studies actually taking place appear to involve analysis of basic and simplistic measures of communication outputs and content analysis rather than communication outcomes studies exploring the impact this communication might be having on opinion leaders and other influential people or their role influencing attitude, opinion and behavior formation, reinforcement and change.

Methodology for this research involved longitudinal trend analyses with a fairly extensive web-based questionnaire. Data include responses from more than four thousand public relations practitioners averaging more than 500 responses each year since 2006. Subjects were selected via purposive samples collected from donor rosters of the Institute for Public Relations and membership rosters of the Public Relations Society of America (PRSA), the Arthur W. Page Society and the International Public Relations Association (IPRA).

Download a PDF version of the entire report here: An Updated Examination of Social and Emerging Media Use in Public Relations Practice