Posted on December 3, 2019 by Brittany Higginbotham

Professionals and pre-professionals gathered in sunny San Diego, California on Oct. 18-22 for the 2019 PRSA International Conference. The conference featured speakers like Bob Woodward, Laura Ling, Richard Dreyfuss, former President of Mexico Vicente Fox and more. Attendees of the week-long conference experienced breakout sessions, keynote speakers, a visit from the U.S. Navy Band and San Diego Mayor Kevin Faulconer. More than 700 students and 2,500 professionals from across the world, including Peru and Argentina, gathered to network, enhance their education and learn about trending topics in the industry. While there were many exciting sessions at PRSA Icon, five key takeways stood out.

1. Journalist Bob Woodward discussed the polarization of society and how the failure to agree on facts stymies dialogue.

Two-time Pulitzer Prize-winning author and journalist for the Washington Post Bob Woodward spoke on moral responsibility, comparing Nixon’s Watergate scandal and today’s media and political landscape. His discussion in the first half of this General Session surrounded moral responsibility and “the centrality of truth.” This centrality of truth is the basis of fact and is best summed by Woodward:

“How can we have useful dialogue and citizen understanding when there isn’t a common agreement of what a fact is?”

Woodward emphasized the importance of humility in a Q&A session with a fellow General Session speaker, journalist Laura Ling. He shared this advice to communicators today, encouraging them to be honorable in all circumstances. He also stressed that journalism in 2019, more than ever, needs to focus on the facts because, in quoting HBO’s Chernobyl: “Every lie we tell incurs a debt to the truth. Sooner or later that debt is paid.”

2. Academy-award winning actor Richard Dreyfuss spoke about the importance of getting civic engagement back in society.

“Until we get that civic engagement back, we will be dragged back and forth from one partisan passion to another,” Dreyfuss said. “We need to remember that due process is the process due to any human being in any decent society.”

He created the The Dreyfuss Civics Initiative to “revive, elevate and enhance” the teaching of civics in public education. PRSA awarded Richard Dreyfuss its inaugural Civic Engagement Award.

4. Journalist Laura Ling offered a message of hope and the importance of gratitude while recounting her imprisonment in North Korea.

Laura Ling, writer and journalist for Current TV, spoke at the General Session about her shocking experience being captured and imprisoned in North Korea for five months while working on a story about trafficking women for the Current TV documentary, “Vanguard.” Ling shared her story about her darkest hour and the strength of gratitude.

Her story reached headlines around the world. Ling was terrified, unsure if she would ever see her family again. “I felt as though I was living this out-of-body experience,” she said.

Originally sentenced to 12 years in a North Korean labor prison, Ling was full of hope during her captivity and practicing gratitude kept her hope alive. After 140 days in captivity, she and her colleague Euna Lee were released with the help of former President Bill Clinton and her sister, journalist Lisa Ling.

“It’s something that I continue to do to this day. I have found that it can not only bring a sense of peace, but also of purpose.”

5. Vicente Fox, former president of Mexico, says you can change your situation in life with a strong sense of purpose.

Speaking at the General Session, former President of Mexico Vicente Fox shared his journey of becoming president through the power of self-determination and purpose.

His focus as President was on global trade and industrialization efforts, but through diplomacy and kindness. The former President now runs a non-profit foundation, Centro Fox, with his wife, former First Lady of Mexico Marta Sahagún Fox. The foundation’s purpose is to develop young leaders in Mexico and Latin America.

Invest in your future next October in America’s Music City for the 2020 International Conference. The conference will highlight the intersection of media and technology on October 25-27 at the Gaylord Resort and Convention Center in Nashville. 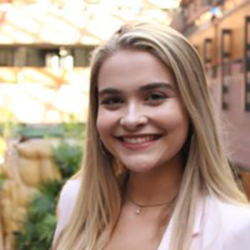