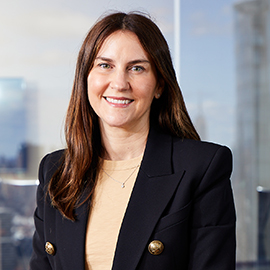 Jennifer Skyler is the Chief Corporate Affairs Officer at American Express overseeing public affairs and media relations, social media, colleague communications, reputational risk management and corporate social responsibility. She is a member of the Company’s Executive Committee, as well as Chairperson of the American Express Foundation.

Prior to American Express, Skyler served as WeWork’s Chief Communications Officer at WeWork, where she built a multi-disciplinary department that included communications, government relations, public affairs, strategic events, brand and social impact. Before WeWorkthis, Skyler ​launched and oversaw Facebook’s consumer communications and data science teams and was responsible for the press strategy around key products and partnerships that encompassed news, sports, entertainment, and social good. She also worked at Polyvore, a company acquired by Yahoo, where she was the first public relations hire, leading their communications and marketing strategies.

Skyler began her career in newsrooms, first at CNN, where she started as an executive assistant and rose through the ranks to become a White House producer. After working with Norah O’Donnell at MSNBC, she became an anchor producer at the CBS Evening News With Katie Couric. At CBS, she was part of the team that was nominated for two Emmy awards and won the Alfred I. duPont Award for political coverage during the 2008 election.

A graduate of the University of Michigan, Ann Arbor, Skyler majored in Communications Studies with a concentration in Japanese. She serves on the University of Michigan’s Tri-State NextGen Leadership Council, is a member of the Institute for Public Relations Board of Directors, is on the National Trust for Historic Preservation Board of Trustees, sits on the Board of All in Together, and is a member of the Arthur W. Page Society.

A native of Flint, Michigan, Skyler lives in New York City with her husband, Ed, and their three children.