Part One: “We Are Not Thinking Machines. We Are Feeling Machines That Think.”

Download PDF: Part One: “We Are Not Thinking Machines. We Are Feeling Machines That Think.”

Back to our roots: the Science Beneath the Art of Public RelationsTM

While public relations once called itself an applied social science, it now risks being left behind as anachronistic.  After decades of fine tuning its execution in media relations, mapping influencers, developing detailed plans to segment and target separate audiences for messaging, PR has not kept pace with scientific discoveries in behavioral economics, neuroscience and narrative theory. But now, by connecting three historic accidents and discoveries, we can revitalize this social science to bring far more effectiveness and scientific underpinning to the art of narrative that lies at the very core of successful public relations and all communications. This is a three-part series revealing three compelling lessons communicators can learn from three historic scientific events.

Part One: “We are not thinking machines. We are feeling machines that think.” 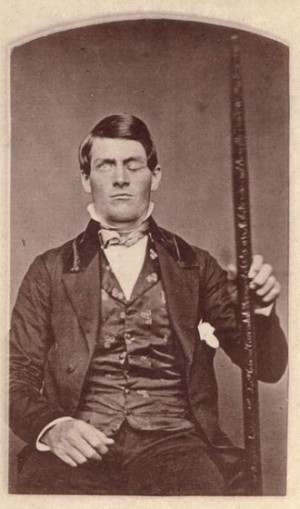 On September 13, 1848, just about 4:30 in the afternoon, a young railroad foreman near Cavendish, Vermont was going about his job of clearing the New England boulders from the path of the new high tech transport mode known as the railroad. He did so by blowing them up. But on this afternoon, the 13-pound steel rod he used to tamp down the black powder in the hole accidentally scraped the stone, sparking an explosion that sent the rod shooting up under his left eye and tearing through the top of his head. The local newspaper reported “The most singular circumstance connected with this melancholy affair is, that he was alive at two o’clock this afternoon and in full possession of his reason, and free from pain.”[1] While Gage did survive, it turned out he may not have been “in full possession of his reason” after the accident.

While today there is a plaque in Cavendish that tells the tale of Phineas Gage, perhaps it should also mark the spot where the modern era of effective communications should have begun.

Gage’s case triggered many neuroscientists, in CSI fashion, to determine just what specific parts of the brain were damaged. Their obsession stemmed from the contemporaneous reports of Gage suffering a personality shift and an inability to make sound decisions after the rod carved a donut hole in his brain.

In 1994, neuroscientists Antonio Damasio and Hannah Damasio, suffering from a lingering curiosity about the Gage accident and the reports of associated behavioral changes, rebuilt Gage’s brain with 3-D software. Their research (“The return of Phineas Gage: clues about the brain from the skull of a famous patient”) put Gage into the same category of anatomical damage as twelve patients Antonio Damasio had studied. He concluded:  “Their ability to make rational decisions in personal and social matters is invariably compromised and so is their processing of emotion. On the contrary, their ability to tackle the logic of an abstract problem, to perform calculations, and to call up appropriate knowledge and attend to it remains intact. The establishment of such a pattern has led to the hypothesis that “emotion and its underlying neural machinery participate in decision making…” 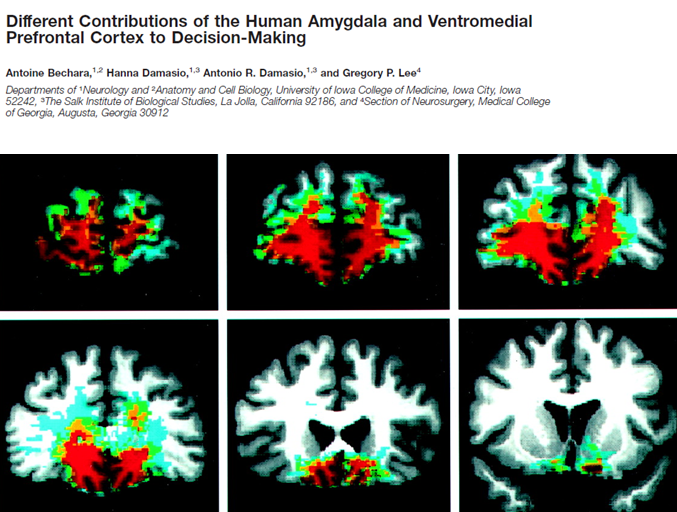 Damasio proceeded with more digging and scanning, using functional MRI to peer into brains in real time, from which he crafted a breakthrough theory[2]  that humans do not make decisions by delegating such tasks to purely cognitive, or reason-oriented, parts of their brain. Instead, there is an interplay of the emotional governing center (the limbic system, primarily the amygdala) and the more evolved area of contemplation (pre-frontal cortex).  In his book, Descartes’ Error, Damasio declares “We are not thinking machines. We are feeling machines that think.” Or as a New York Times book reviewer paraphrased behavioral economist and author Daniel Ariely: “We aren’t cool calculators of self-interest who sometimes go crazy; we’re crazies who are, under special circumstances, sometimes rational.”[3]

Damasio posited a theory called the “somatic marker.” That is, every moment of every day, our brain stamps an emotion onto everything we experience. That emotion, or somatic marker, helps us project into the future and decide what to do when we encounter a similar situation again. If you go to a casino, for example, and gamble away all your money, your brain will mark that moment with a feeling. The next time you go to a casino, the brain will dredge up that old queasy feeling and you will likely behave more cautiously. That is, unless they have a brain abnormality that interferes with this communication between the emotion and cognitive centers of the brain, in which case they act more like a self-destructive addict.

Damasio writes of brain-damaged patients who have lost no intellectual reasoning capabilities at all; indeed they can reason every aspect of a decision but never come to a final conclusion. “The ability to manipulate data and make analysis of costs and benefits is maintained in a very cold way…” says Damasio[4] “The reason they can’t choose, is they haven’t got this lift that comes from emotion. It is emotion that allows you to mark things as good, bad or indifferent. They cannot conjure up, for a given situation, an emotional state, that will help them decide in one direction or another.”

Think of it this way. You are walking through a forest and suddenly you catch a glimpse of something near your foot—a snake! You freeze. Your amygdala, the fight or flight emotion center of the brain is on full alert. Then, gradually, you understand that it is not a snake but a stick that looks quite like a snake. That’s your ventromedial prefrontal cortex kicking in to temper the amygdala’s panic. At this point your brain will also stamp the moment with a somatic marker so in the future you may not panic so quickly. The amygdala, that emotion center, is extremely powerful in young people. “It is believed that a developing amygdala contributes to two behavioral effects: the tendency for adolescents to react explosively to situations rather than with more controlled responses, and the propensity for youth to misread neutral or inquisitive facial expressions of others as a sign of anger. And one of the last areas to mature is the prefrontal cortex, located just behind the forehead.”[5] That agent of calm, the prefrontal cortex, does not mature until about 25 years of age. So until then, the amygdala is free to hijack the brain. In short, a teenager is all snake and no stick. So when targeting a teen audience, you can forget the slower, “System 2” contemplative thinking with the prefrontal cortex as delineated by Nobel laureate Daniel Kahneman in his book Thinking: Fast and Slow.

But even when the prefrontal cortex has matured, humans cannot make decisions based on cool, hard analysis alone. In fact, merely asking people to explain why they prefer one item over another leads them to make poor choices. Professor Timothy Wilson at the University of Virginia discovered this in a much-cited experiment[6] wherein allowed subjects to choose any one poster among five choices to take home. But Wilson told the other half they must explain their choice before taking one. Among those who had no obligation to articulate why they liked a given poster, 95% chose an impressionist painting poster. Yet among the group forced to explain their choice, 50% chose a silly animal poster (think “LOL cats” style). 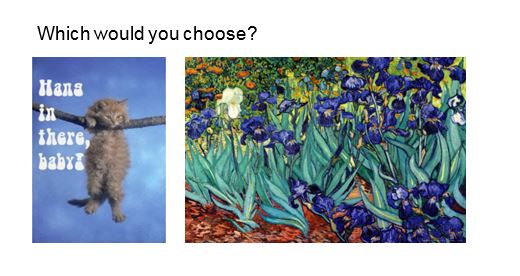 Wilson checked back with each participant several weeks later to ask how happy they were with their choices. Those who did not have to explain their choice and who chose an impressionist painting poster were fine with their choice. However, the majority of those who took the humorous animal posters were unhappy with their choice. There is a growing body of research on the impact of explaining one’s choice on the decision itself. It appears when we interrupt the emotional process with a forced, analytical one, we make decisions we regret. Wilson concluded that “the quality of the art posters that made them appealing… were difficult to verbalize whereas positive aspects of the humorous posters were easy to verbalize…” In other words, if your audience is unsure of its ability to defend its choice, it will go for the choice most easily and readily defensible, even if that is a choice they don’t really like. No one wants to feel stupid defending his or her choice.

Emotion not only forcefully guides our decisions, it boosts our ability to recall just about anything. Several experiments[7] involving fMRI brain scans point to the activation of the amygdala (emotion center) alongside the hippocampus (memory). Emotion serves as a kind of turbo booster, strengthening the imprint of the memory. Some experiments have shown that the emotion need not be related at all to the item or task being burned into memory—just having an unrelated but strongly emotional catalyst works to make the experience or task more memorable.[8] 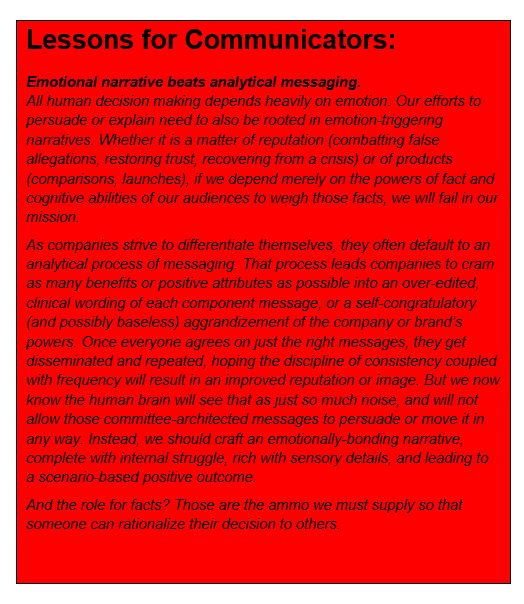 One thought on “Part One: “We Are Not Thinking Machines. We Are Feeling Machines That Think.””