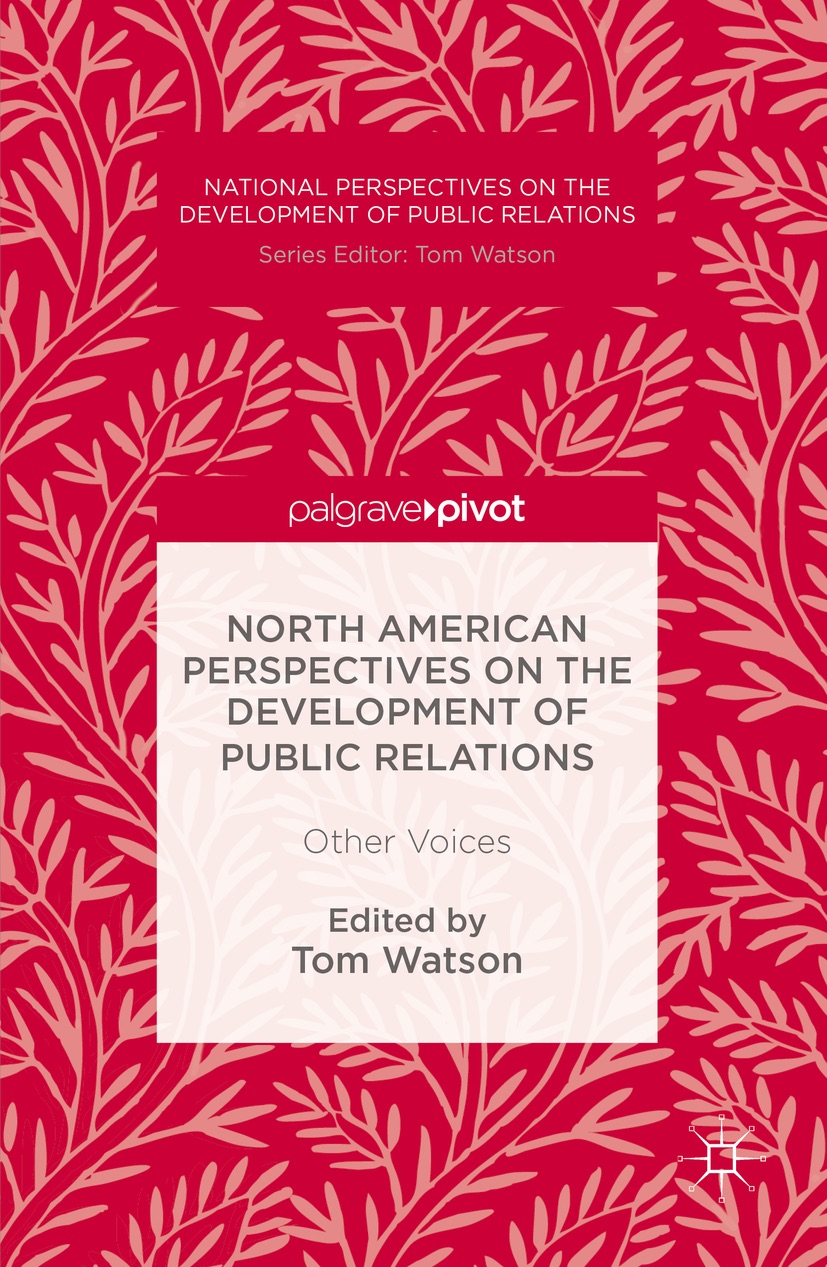 When I planned the six volumes of the National Perspectives on the Development of Public Relations: Other Voices series in 2013, a volume on North America was not initially included in the publishing schedule. My view was that the region’s PR history had been covered adequately in existing texts and journal articles. As the series rolled out and more articles by PR historians appeared in academic journals, it was evident that a major revision of North American PR history was under way and so the seventh book, titled ‘North American Perspectives on the Development of Public Relations’ was added to the series. All chapters, other than the Editor’s Introduction, have been contributed by leading scholars of public relations and its history in Canada and the U.S.

Public relations history written by U.S. textbook authors, in particular, has been criticized for the assumption that public relations (PR) is an invention from their nation. There was also a lack of interest in forms, practices and theorization of public relations that have arisen in other countries. British historian Jacquie L’Etang has commented, “US scholars have always tended to assume that activities referred to as PR have been invented by Americans and exported elsewhere” (2008, p. 328). This attitude is exemplified in Doug Newsom’s 1984 comment that: “Public relations is an occupation, some would say a profession, of uniquely US origin” (p. 30).

More than 30 years later, I am sure that Professor Newsom’s view would have changed but it has been a typical historical expression in the major U.S.-written texts used in PR education around the world. Alongside it has been the progressivist model of PR’s development, onwards and upwards in ever-increasing sophistication and ethical practice. This model is offered widely in textbooks and through Grunig and Hunt’s four models of public relations practice (1984), which start with the low ethics of press agentry and move upwards to the highly ethical two-way symmetrical communication. Although those models have been revised over time, the original four models of 1984 have been taught widely around the world and accepted by many as being accurate representations of the development of PR.

Since the early 1990s, there have been challenges to PR’s history in North America. These started with low rumbles from Ron Pearson (1992) and Karen Miller (2000) even as Scott Cutlip’s two major books (1994, 1995) with their progressivist history of PR in the U.S. were being published. During the past 15 years, the low rumble has increased to overt challenge. The progressive model has been widely criticized as wishful thinking; the verity that PR evolved from corporate and agency bases sometime early in the twentieth century has been debunked, notably by Professors Meg Lamme and Karen Miller Russell (2010); the under-researched role of women in PR’s evolution has been identified and is being addressed in Canada and the U.S.; the importance of activism in PR’s expansion in North America is being recognized; and the formation of PR in Canada has moved from being presented as a sideshow to the U.S. to a very separate experience with strong links to governmental and organizational communications.

As well, specialist practices such as governmental communication, lobbying and political communication, entertainment publicity and PR, and the professionalization of the field have been researched as major topics. The manner in which history is written (historiography) in North America began being revised in the past decade, too, with extensive consideration of antecedents, proto-PR and the role of those who did not self-identify as PR practitioners. The role of “great men” such as Ivy Lee, Edward Bernays and, to a lesser extent, Arthur Page in the formation of PR has been contested and played down.

There is no doubt that North America, especially the U.S., has exerted greater influence on the development of PR around the world than any other region. There is also plentiful evidence for this assertion in the first five books of this series (Asia, Eastern Europe, Middle East & Africa, Latin America, and Western Europe). It is also the largest single region in the world for the education and employment of practitioners; its professional and industry bodies exert major international influence upon the development of practices, and the design of education and training. However, there are many other forms of public relations being practiced that emerged from other cultures not connected with the U.S. These have challenged the primacy of North American models and practices.

It is hoped that this volume will play an important role in reshaping the history of North American PR to portray more accurately antecedents, evolution, failures, successes and the width of participation, including gender and race, than heretofore.

Palgrave will publish North American Perspectives on the Development of Public Relations: Other Voices on 27 August. http://www.palgrave.com/gb/book/9781349950430

Tom Watson, Ph.D., is Emeritus Professor in the Faculty of Media & Communication at Bournemouth University in England. He is the founder of the International History of Public Relations Conference. Follow him on Twitter @twatson1709.