Strategic Use of Facebook for Public Engagement in Higher Education Institutions

This post, originally published in the Public Relations Journal, is provided by the IPR Street Team, a group of student writers who help IPR bring the latest research that matters to the practice.

For the full study, visit the PR Journal here.

Patrick D. Thelen, Ph.D. and Rita Linjuan Men, Ph.D., APR, from University of Florida recently published a study examining how the Office of the President at the University of Florida has strategically utilized Facebook. A content analysis was conducted on 146 posts published by the Office of the President and the 977 comments that these posts received between December 2014 and June 2017.

Kent and Taylor (1998) proposed the dialogic communication theory as a way to develop and maintain effective relationships between organizations and their publics.

Their theory is composed of the following five principles:

Messages appeals are broken down into rational appeals (presentation of facts in a straightforward, objective manner,) and emotional appeals (target an individual’s psychological, social or symbolic needs).

Public Engagement Varied Depending on Which Message Strategy was Utilized

The total amount of engagement per post increased year by year. Content and format of posts impacted public engagement.

Engaging audiences through Facebook and other social media platforms gives leaders an opportunity to participate in meaningful interactions and expand their reach. Message appeals, specifically emotional and humor messages, play a powerful role in developing relationships and generating engagement. Educational leaders can effectively use social media to inform their audiences about the university’s stance and position on social and political issues, listen to the feedback provided by the community and engage in dialogue.

For the full study, visit the PR Journal here. 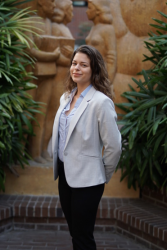