This blog is provided by the IPR Center for Diversity, Equity, and Inclusion

In the last few years, the United Nations named gender equality as the fifth of 17 Sustainable Development Goals (SDG). Additionally, the #Metoo social movement brought deep-rooted gender discrimination issues back into the arena, specifically in regard to the business environment. The communications industry, in particular, has promoted discussion on the issue. Special reports (i.e. CIPR, 2017; GWPR, 2019) along with particular networks to enhance women’s leadership have been established and gained traction. Industry reports and the most recent scientific meta-studies (Place & Vardeman-Winter, 2018; Topić et al., 2020) corroborate that gender inequalities and discriminations still persist in the communications field.

Annually the European Communication Monitor monitors female practitioners and gender issues in the profession. This year it evaluates how gender equality achievements are perceived. The study also explores the awareness of the glass ceiling and its causes and responsibilities at the individual, organizational, and industry level.

Gender issues remain a particular concern in an industry where three out of four departments and agencies in Europe employ more women than men, but still only one out of two leaders are women. Over half of practitioners (55%) observe an improvement in gender equality in their country, but disagreement arises when it comes to evaluating how much has actually been done to support female practitioners: 50% of men believe enough has been done, while 45% of women disagree.

The glass ceiling refers to unacknowledged barriers that keep female practitioners from rising in the hierarchy (Dowling, 2017). There are still 32% of European communication practitioners that deny the glass ceiling exists at any level. 42% acknowledge the problem at the professional level in their country, but only 22% concede it is an issue in their own organization or department.

According to previous research, denial of the glass ceiling occurs in the field (Yeomans, 2019) and is most commonly seen in male practitioners (Zerfass et al., 2014). This study shows that only three out of ten male respondents (30%) acknowledge the problem in the profession and only 11% accept that it is observable in their organization or department. In contrast, 29% of female practitioners believe they have been personally affected by the glass ceiling.

When considering factors that perpetuate the glass ceiling, the results corroborate previous research (Catalyst, 2004; GWPR, 2019; Meng & Neill, 2020; Moreno et al., 2020). The majority identify issues at the organizational level: lack of flexibility to take care of family obligations (62%) and in transparent promotion policies (58%). Barriers at the macro level of the profession are also identified – a lack of networks and programs for women (39%) and too few inspiring female role models (34%). Yet, at the individual level, ­a lack of motivation and competence of female practitioners is identified by a small number of respondents (15%). Because psychological and cognitive differences are not empirically conclusive, gender differences tend to be explained today in educational, social and cultural factors (Mazei et al., 2015; Tench et al., 2017).

Responsibilities for overcoming the glass ceiling are also placed at the organisational level for 65% of respondents. Nevertheless, CCOs and agency CEOs tend to attribute shared responsibilities to the professional community and female employees.

Results of this study reinforce that gender prejudice still exists in the profession. The main factors for the glass ceiling relate to work-life balance conflicts, and interventions are needed firstly from organisations and secondly from professional communities.
However, a very positive insight arises from this study: practitioners working in excellent communication departments report less problems with gender inequalities, and women working in those excellent communication departments are less affected by the glass ceiling. 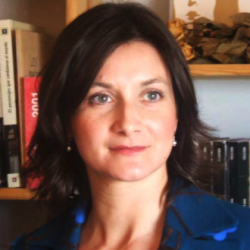 Ángeles Moreno is currently President of the European Public Relations and Research Association and scholar at the high-performance Group of Advanced Studies on Communication (GEAC) with extended experience on international projects. Her research has been awarded by PRSA, ICA, EUPRERA and AIRP. Highly productivity author with 111 publications.