Recently, nearly 1,200 PR leaders and professionals in the U.S. completed the same survey.* Grades for leadership performance and trust were unchanged in 2017, but slipped for work culture, job engagement and job satisfaction. The overall grade for PR leaders fell from B- to C+.

Gaps between leaders’ and employees’ perceptions of the five areas remained wide, while gender differences deepened sharply. Previous concerns about two-way communication, shared decision-making and diversity were again underscored by men and women. 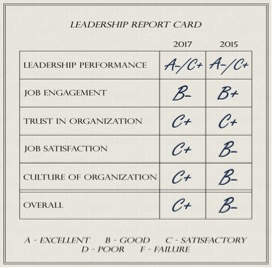 Leaders’ and their employees’ perceptions of the top leader’s performance again differed sharply: Leaders gave themselves an “A-,” while followers gave them a “C+.” The grades were virtually identical to those in 2015. Leaders received higher marks for ethical orientation and involvement in strategic decision-making but earned lower grades for their vision, relationship-building skills and team leadership capabilities.

Women in public relations were significantly less engaged, less satisfied with their jobs, less confident in their work cultures, less trusting of their organizations and more critical of top leaders than men. The findings were more pronounced among women working at lower levels in the organization. The only area without a significant gender issue was at the top: top female and male leaders in organizations rated each of the five areas more or less the same.

Progress in diversity in several senses remains painfully slow. For women in the survey, it appears that being successful in the field is still challenging; the pay gap is real; the opportunity gap is real; and the being-heard-and-respected-gap is real. The power to act to close these gaps resides in the minds, hearts and hands of current leaders at all levels in the profession.

The purpose of this biennial report is to assess leadership in PR, identify enrichment opportunities and then act to strengthen our profession’s leadership—a crucial strategic asset. The 2017 Report Card underscores the continuing gaps. While social tensions in our world today have likely exacerbated these issues, we need to be bigger leaders and close the gaps.

A full report of the research is available at: plankcenter.ua.edu/

Dr. Bruce K. Berger, Ph.D., is a professor emeritus of Advertising & PR at the University of Alabama. In addition to being the Founding Director of The Plank Center for Leadership in PR he also serves as its Research Director. He is also an IPR Trustee.

William Heyman is the Founder, President and CEO of Heyman Associates, as well as Founder and Director of Taylor Bennett Heyman, an affiliated firm with offices in Hong Kong, Singapore and Melbourne. He is also an IPR Trustee.