This blog is provided by the IPR Measurement Commission in celebration of its 25th Anniversary and AMEC’s Measurement Month.

It’s hard to imagine 2004. I joined The Goodyear Tire & Rubber Company a year earlier and attended the “Summit on Measurement” in New Hampshire for the first time. I met Katie Paine, Dr. Don Wright, and countless other people giving their time and effort to the Institute for PR to bridge the gap between the public relations profession and its research base.

The days passed in a blur as I learned about how PR could be measured. At the time, I believed what people had told me: PR can’t be measured. It’s an art. It’s never going to be taken seriously like marketing is. It’s a “nice to have.”

Those tales were especially applied to employee communication. Employee communication is “a warm fuzzy for employees,” not a serious, strategic discipline (as a General Counsel once told me), and certainly not as important as media relations. The Summit caused me not just to revisit those tropes, but to believe exactly the opposite.

I cornered Dr. Don Wright about how the Summit had really inspired me and asked how I could get involved with the organization. By December 15, I was elected by the IPR Measurement Commission to join its ranks. In short order, I was rubbing elbows with people whose work I had read.

At first, I was intimidated. I was relatively new in public relations and had just started at Goodyear following years at KeyBank and a small agency. Measurement was so new to me. How could I possibly contribute to the organization? The Commission embraced me and nurtured my intellect. I launched a research project at Goodyear and published the results. I did small projects, like looking into how companies were using social media and published those (both of these studies were in partnership with Dr. Julie O’Neil, current chair of the IPR Measurement Commission!) I got bit by the research and measurement bug big time.

I moved on to the regional powerhouse National City Bank and continued researching, measuring, and publishing. This was during the 2008 financial crisis, and my measurement plans expanded to examining the impact of unpaid media on direct mail performance, quantifying the tone and volume of negative and positive PR on the perception of risk, and advising the CCO on projects to counter negative coverage.

I became a consultant, with the measurement at the heart of strategy, and now I’m a teaching professor at BGSU.

All of that is only possible because of that conversation with Don Wright some 18 years ago. The IPR Measurement Commission has meant so much to me personally and professionally. Gee, it only meant the discovery of my life’s work! 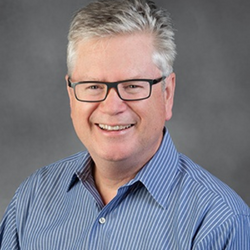 Sean D. Willliams is a member of the IPR Measurement Commission and an Assistant Teaching Professor at Bowling Green State University.